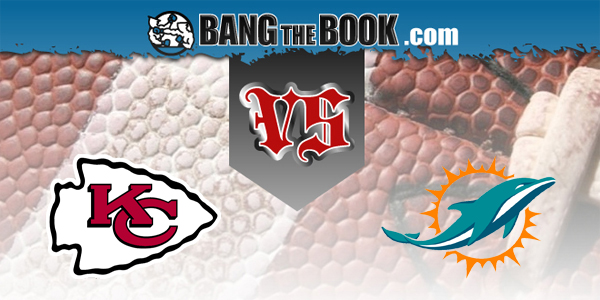 Last season they were laughing at the Miami Dolphins.

They’re not laughing now. Or if they ARE laughing, they are doing it at their own peril.

The Dolphins, who won five games last season despite having the least amount of talent in the NFL, are sitting at 8-4 for the first time since 2003 (9-3 against the spread). And they are a legitimate contender for a playoff spot, either by way of an AFC East title or a wild card spot.

On Sunday, they will get a big test as they encounter the defending Super Bowl champion Kansas City Chiefs, in a game that begins at 1 PM ET at Hard Rock Stadium in Miami Gardens.

BetAnySports customers will have an opportunity to get reduced juice for better odds, not to mention real-time wagering after the kickoff through Sports Betting Prime.

Miami is making a habit of winning “ugly.” Last week they scored a 19-7 win over the Cincinnati Bengals. Tua Tagovailoa threw for 295 yards, though he had a rocky time of it in the first 30 minutes. This continues the transformation of this franchise, which looked like it might be one of the worst in recent NFL history through the first five games of the 2019 season, as insinuations about “tanking” hurled through the air.

But the Dolphins were undertaking a process of re-making the roster, gathering a slew of draft choices and clearing an awful lot of salary cap space. In the off-season they upgraded themselves in almost every department, and the results have been seen much sooner than most folks expected. They also made the controversial move toward first-round draft choice Tagovailoa as the starter at quarterback, even though such a thing came as a shock to incumbent Ryan Fitzpatrick. They simply saw more upset with the rookie, which would come in handy as the team made a playoff run.

The Chiefs have lost only once in twelve games (11-1 SU, 6-6 ATS), to the Las Vegas Raiders, and they have every incentive to keep going strong, since there will be only one AFC playoff bye. They are knotted up with the once-beaten Pittsburgh Steelers for the #1 seed.

In the NFL betting lines that have been established on this game by the folks at BetAnySports, the Chiefs are laying points:

There is no quarterback controversy with the Dolphins. There was no scenario where even after 111 yards on 19 attempts, Brian Flores was considering yanking Tua and putting Fitzpatrick into the game. What happened instead was that they went into a more up-tempo, no-huddle approach, in some cases splitting running backs out wide, and Tua responded with 185 second-half yards.

And two of those free agent pickups on defense – Shaq Lawson and Kyle Van Noy – combined for five fourth-quarter sacks. The second half action was punctuated by an all-out brawl, when Cincinnati’s special teams gunner, Michael Thomas, launched with a second cheap shot against punt returner Jakeem Grant, bringing Flores off the sideline with an absolute fury. That scored him a lot of points with his players.

Obviously if there is anything we’d be worried about, it’s that Tua wouldn’t be able to trade points with Mahomes. And in his brief NFL career, he’s had trouble playing two halves of football. But guess what? He hasn’t thrown an interception yet.

And there are some real virtues this Miami team possesses. They are allowing just 17.7 points per game. They’ve held their opponents to just 32.2% on third down, which is the best percentage in the league. They have also covered seven of their last eight games. And who knows – they may have figured out a way to use all-purpose talent Lynn Bowden last week. He can throw, run, catch and even return kicks, as he did at Kentucky last year.

Kansas City has more weaponry; that is for sure. They have gained more yards and scored more points per drive than any team in pro football. And the Chiefs are the best team in the AFC. Period. But they have been in some very favorable situations this season where they have made things more difficult for themselves than they should have (against the Broncos, Chargers, Panthers and Raiders, even the Bucs). And perhaps it’s worth pointing out that last year’s version of the Fins scored victories over the two previous Super Bowl champs (the Pats and Eagles).

We’re more than happy to take the points here with MIAMI.

BetAnySports is a tremendous place for you to enjoy the rest of the NFL season, because you’ll always get a better deal on the odds with reduced juice, and you can make real-time wagers with Sports Betting Prime…….. And you’ve got convenient ways to open up an account, like Bitcoin, which never incurs a transaction fee!