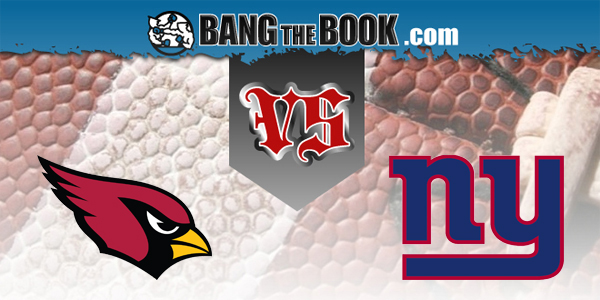 There is excitement again at least in the Big Apple when it comes to football. While the New York Jets have tested everyone’s patience, the New York Giants are in the driver’s seat as far as a division title is concerned.

This is something BetAnySports patrons would not have expected after an 0-5 start. But here they are, with a tie for the NFC East lead, a tie-breaker advantage over Washington, and a string of five wins in seven games under first-year coach Joe Judge.

On Sunday the Giants will square off against the Arizona Cardinals in a game that takes place at 1 PM ET at MetLife Stadium in East Rutherford, NJ.

Would you like a break on the odds? Then you need to take advantage of reduced juice. Do you want to keep the action going even after the kickoff? Then you’ll want to check out Sports Betting Prime, which enables real-time wagering.

As the Giants, who have swept the Washington “Football Team” and thus have that edge in the division, have been coming of age, it is not necessarily because of the explosive growth of Daniel Jones, who has eight TD passes and nine interceptions. No, it is because of the defense, which has allowed just 18.9 points per game, seems to be improving every week, and riddled Russell Wilson last week.

While Wilson had fair numbers, his Seahawks gained only 4.7 yards per play and he was sacked five times. Seattle, which had been trying to go to the ground game more lately, had a 2-to-1 ratio of passes to runs.

Think about this for a second – the Giants won a game on the road against a division leader, even though their quarterback threw for only 109 yards. And there weren’t any gimmicks either.

The quarterback we’re talking about is Colt McCoy, filling in for Daniel Jones, who had pulled a hamstring. McCoy is a place-holder; the guy who is there to manage the game and not lose it. The way the Giants have been defending, they can afford that kind of stewardship.

So will Jones be back this week? We’ll talk about that in a minute.

In the NFL odds that have been posted on this game by the folks at BetAnySports, the Giants are underdogs at home:

The story with Jones, as we hear early in the week, is that Judge will let him play if he can show he can “defend himself” on the field. What that means, basically, is whether he can demonstrate enough mobility to escape pressure and not be a “sitting duck” in the pocket. We presume offensive coordinator Jason Garrett will also be in on this decision.

One of the big stories about the Giants is also surrounded by controversy. Judge had hired an offensive line “consultant” named Dave DiGuglielmo, who like him, had been an assistant in New England. Under offensive line coach Marc Palumbo, they had been making progress. So Palumbo, threatened by the presence of someone looking over his shoulder, got into a shouting match with Judge, which led to his firing.

The fact is that whoever deserves the credit, the Giants have developed a ground game. They had averaged 142 yards for a six-game period, then had 190 yards against Seattle (135 from Wayne Gallman), and it is worth noting that all this has been done without their leading rusher from last season (Saquon Barkley, who is out for the year after a torn ACL) and this season (Jones, one of only three QB’s who leads his team in rushing).

Defense and a ground game. And Judge preaching all along that things were starting to progress forward. Don’t count this team out. Unquestionably they can make Kyler Murray a tad uncomfortable as they did with Wilson. With a healthy-enough Jones, we’d be happy to take the points here with the GIANTS.

BetAnySports is a tremendous place for you to enjoy the rest of the NFL season, because you’ll always get a better deal on the odds with reduced juice, and you can make real-time wagers with Sports Betting Prime…….. And you’ve got convenient ways to open up an account, like Bitcoin, which never incurs a transaction fee!