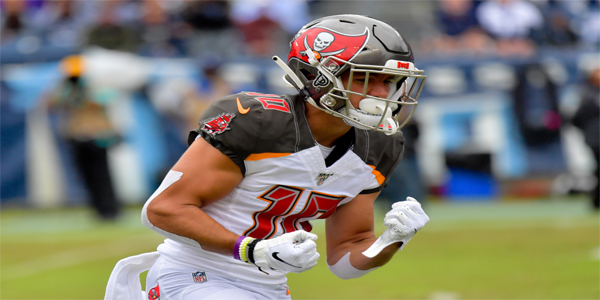 Sometimes, when you are talking about players who don’t figure to be getting a lot of snaps and a game, it becomes relatively difficult to evaluate a proposition bet on one of them, particularly as you don’t know how the game is going to progress.

For BetOnline customers, one of those players might be Scott Miller, a wide receiver for the Tampa Bay Buccaneers. Miller kind of gets lost in the shuffle of this roster, as wide receivers with more name recognition naturally get more attention. But there’s something interesting about how this guy is constructed, where he comes from, and how that has fit in with Tom Brady’s history as an NFL quarterback.

Obviously if you have followed Brady’s career, you know that he has always used a Smurf-type receiver, whether that is Wes Welker or Danny Amendola or Julian Edelman. And he has made very successful NFL players out of those guys. Miller is kind of similar in stature, in that he is about 5 foot 11 and 175 pounds. But there may be a couple of things that distinguish him.

For one thing, Miller is fast – VERY fast. When he was at his pro day at Bowling Green State University in 2019, he ran the 40-yard dash in 4.39 seconds. so he’s not just one of those guys who kind of wanders out there and slips into a seam.

No, this guy can take it to the house. And one of those demonstrations happened right before halftime, when he pulled in a 39-yard touchdown pass from Brady to put the Buccaneers up 21 – 10 over the Green Bay Packers in the NFC Championship Game. Miller just sprinted out and beat Packer corner Kevin King in what was a real back-breaker for the Packers.

At BetOnline, we are encountered with a prop for Super Bowl 55 on how many receiving yards Miller will have.

It should be noted that Miller’s average was 31.3 yards per game this season. and that in nine of the games he played in he had a higher yardage total than this posted figure. When the Bucs and the Chiefs met in Week 12, he did not have a catch. And his playing time decreased a great deal once Antonio Brown arrived.

His best game of the season came in Week 7, when he had six receptions for 109 yards against the Las Vegas Raiders. So far in the playoffs he has caught four passes for 80 yards.

So it is clear that Miller is a guy that has to fight for playing time. And when your team can put the likes of Mike Evans, Chris Godwin and Brown on the field at the same time, you are not going to get a lot of opportunities. But the key is that Miller seems to have made the most of those opportunities that have been provided to him.

As you look at great pass-catchers like Evans, Goodwin, Brown and tight end Rob Gronkowski, Miller is the guy who has averaged the most yards per reception. With 33 catches for 501 yards, he has a 15.2 yard average per catch. And if you included the playoffs, that average elevates to 15.7.

He is likely the fastest wide receiver the Buccaneers have. And you have to like how brash this kid is; he recently went on a radio show and flat out said that he would smoke Tyreek Hill in a foot race. Maybe that is altogether possible. We are not sure where he will be positioned on the field when he does play; obviously if Brown had been declared out with his knee injury, Miller would have a lot more prominent role to play. But whether he is in the slot or out wide, he is going to be a threat to make a big play. and that is why we think that you may only need one catch to get over this posted yardage total.

Considering that fact, we will go OVER 18.5 yards on this props play for Miller.