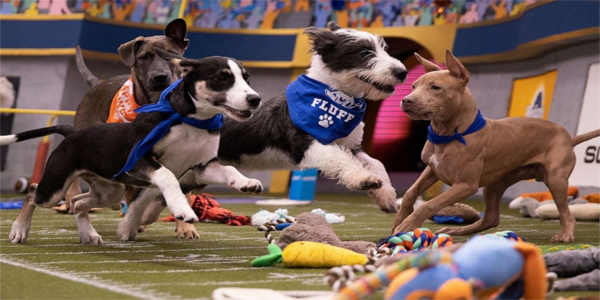 As you know, when the Super Bowl arrives, the public practically demands that they be able to bet on anything and everything.

BetOnline answers the call, and as long as they do, we have to give all of this some careful thought. Here is the by-product of that brain power as involves some of those prop bets

This will be televised at 2 PM ET on Sunday on Animal Planet…….. Our information is that after last year’s loss, Team Ruff went into serious “rebuilding” mode. They received a higher draft pick, made numerous changes on the coaching staff and signed a couple of Chows in free agency. They have vowed to come out with a new resolve, and we have faith that they’ll learn their lessons. So in this virtual pick’em matchup, we’re going with TEAM RUFF.

How Many Times Will Joe Biden Tweet During Game?

We’ve been keeping an eye on this one. Biden’s “inner circle” is a bit concerned that he may indeed Tweet about a game, but it may be the wrong game. So they want to be sure they have control of the remote. But Jack Dorsey of Twitter has insisted that since Biden is a Democrat, he can Tweet just about anything he wants without reprisal, as long as he doesn’t sleep on a “MyPillow.” Let’s take a shot.

I would lean toward the affirmative here, although I wonder if he’ll call collect.

Maybe a better prop here might be whether someone else will have to dial the number for him.

I’ll tell you this much – he won’t call Tom Brady, who, as far as we can tell, remains a steadfast Trump supporter.

How Many Times Will Trump be Said?

Oh, how quickly they forget him! We have to lay 9-1 odds on this one? You mean it’s not even a close call?

How about if it’s used in context? Let me explain. I’m not sure whether Tony Romo is in on this prop, but he could very easily say something like, “The mobility of Patrick Mahomes could TRUMP the effects of the Tampa Bay pass rush.”

If Bucs Win Coin Toss Choice Will Be

See – this is not all silly stuff.

It is my own theory that the Buccaneers would like to establish as much of a running game as they possibly can, in order to put together longer drives and reduce the number of possessions for Patrick Mahomes and his offense. And they aren’t going to help themselves in that pursuit if they get behind the same way they did when they played the Chiefs in Week 12.

In that game, Kansas City got off to a 17-0 lead, and made the Bucs play catch-up. That kind of blew away any hope of running the football. The feeling on this end is that if they win the toss, they are going to want the opportunity to take the ball with a chance to take a lead early. Why risk going down a touchdown early when you can do something about it?