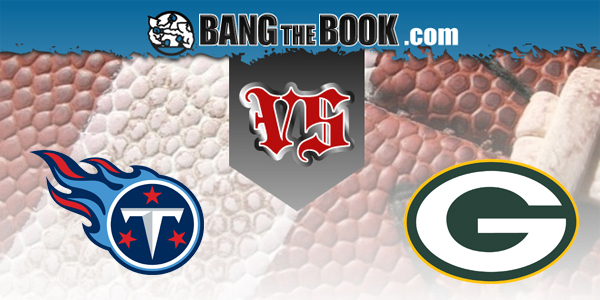 This game obviously has some true playoff implications. Green Bay can clinch the #1 seed in the NFC if they win and if the Seahawks lost. Tennessee is not assured of any playoff spot just yet.

One tie-in is with Green Bay coach Matt LaFleur, who had been the offensive coordinator for the Titans. So he knows a lot about the organization, but did not work under current head coach Mike Vrabel.

Aaron Rodgers had a rather hard time of it last week against Carolina, throwing for just 143 yards and getting sacked five times by a defense that is far from being outstanding. But his numbers for the season, which include 40 touchdowns and four interceptions, indicate that he is likely to bounce back from an off-game.

What you’ll get with the Packers (11-3 SU, 8-6 ATS) is some balance with the run game, which has become revived in recent weeks, to the tune of 646 weeks in the last four games. Davante Adams is going to be virtually unstoppable, for almost any secondary (1186 yards, 14 TD’s) and Rodgers has found a “money” guy in tight end Robert Tonyan (ten TD’s).

The Titans (10-4 SU, 7-7 ATS) have been lighting up the scoreboard of late, tallying 187 points in the last five games. The team started turning things around when Marcus Mariota was benched in favor of Ryan Tannehill last season, and that roll has continued. Tannehill, a 66.5% passer, has a sizzling ratio of 31 TD’s to five INT’s and has been sacked just once in his last three games.

And then of course there is the beast that is Derrick Henry. He carried the Titans in the second half of last season and all the way to the AFC title game, and this season he’s averaged better than 100 yards a game (1679 total, with 15 TD’s). And Tannehill has a pair of outstanding receivers in Corey Davis 915.8 yards per catch) and AJ Brown (15.7).

So both of these teams have well-rounded offenses, with the capability of playing “winter ball.”

Tennessee and Henry ought to find their way on the ground, as the Packers have not been super-sturdy against the run (4.5 ypc allowed), remembering they are often ahead and don’t have to endure an opponent’s imposing ground game all that much.

At the same time, if Rodgers is looking for some room to operate, he should find it against a team that doesn’t put pressure on. The Titans are dead last in the NFL in Sack Percentage, and the decline from 6.3% last year to 2.4% this season is quite noticeable. And you know, the Titans are also the only team in the NFL that has allowed better than 50% success on third down (52.6%, to be exact).

And let’s keep in mind that these are the NFL’s two most effective teams when it comes to scoring touchdowns on red zone appearances. And by the way, Tennessee is just 30th in the league in red zone defense.

The tendency on the part of Tennessee is to go “over” the total with Tannehill at quarterback (21 of 27 starts). That would usually be the best way for us to go here, but maybe not as strong as it might be otherwise because of weather – we are looking at temperatures at 20 or below that at Lambeau Field, with the strong possibility of “snow showers” where they could have at least an inch or two.

I like Green Bay slightly here because of their defensive advantage, and because Rodgers isn’t the type to commit a lot of turnovers, which the Titans feast on. And we can do a small parlay with that and the”over” on the side.

It’s an incredible Sunday night at BetAnySports once again. …….Remember that you get reduced juice, which offers better odds. If you miss the kickoff, that’s no problem, as you can do real-time wagering through Sports Betting Prime…… Open an account with a debit card, credit card, person-to-person transfers or the virtual currency of Bitcoin, which is fast and easy with their automatic system, and NEVER incurs a transaction fee!