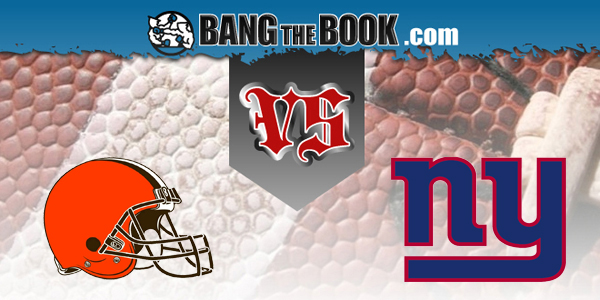 The Cleveland Browns are coming off a rather wild effort against the Baltimore Ravens in which it was clear that they went “balls-out.”

The New York Giants seem to have demonstrated last week that they weren’t quite up to the task of holding on to the lead in the NFC East.

The Browns and Giants, very much in the playoff hunt, will do battle in NBC’s Sunday Night Football matchup at MetLife Stadium.

The Browns are 9-4 (5-8 against the spread) and they are actually in a tie for the #1 wild card berth in the AFC. But when the Baltimore Ravens beat them last Monday, they pulled to within one game of the Browns in the playoff queue.

The Giants are 5-8 SU (8-4-1 ATS) and they trail Washington by a game in the NFC East. So both of these teams might find themselves in the post-season. But New York really needs to win this one.

Baker Mayfield definitely took matters into his own hands last Monday night against the Ravens. he threw for 343 yards and two touchdowns, but the Browns kind of got out of their game plan, didn’t they? This is a team that ranked second in the NFL in rushing, yet they threw the ball 47 times and ran it on 28 occasions. We suspect that is an anomaly, and that they will get back to business as usual against the Giants.

And Lamar Jackson was a lot of trouble for them to corral. He had 124 yards on the ground, and while Cleveland would not necessarily be encountering the same kind of situation with a healthy Daniel Jones, they would still have to deal with the threat of him running.

But Jones is not healthy. He had a bad hamstring going into last week’s game against the Arizona Cardinals, and it showed, as he was unable to escape blitzes, suffering through six sacks and handcuffing his team on offense. The Giants had only ten first downs in the 26-7 defeat.

And now, to make matters worse, Jones has a sprained ankle as well. head coach Joe Judge probably made a mistake in letting him start last week. But it’s likely Jones will be sitting this one out, leaving things in the hands of Colt McCoy, who’s got a connection to the Cleveland franchise, having been drafted by the Browns in 2010 and making eight starts for them. In other words, he’s part of a lengthy legacy of Cleveland QBs who didn’t quite work out for them.

The Giants are dealing with another situation. Offensive coordinator Jason Garrett, who was Dallas’ head coach last season, has been taken out of action with a COVID diagnosis, so Freddie Kitchens, the tight ends coach, will take his place on Sunday night. And this probably is no coincidence.

Kitchens was the Browns’ head coach last season, but was fired after a 6-10 record. Most observers considered him not ready to handle the situation. But he knows a lot about the Browns and their personnel and certainly about Mayfield. Maybe that information will be useful.

A healthy McCoy is better than a lame Jones. And the Browns did leave a lot on the field last week, only losing the ATS decision when they botched one of those desperation lateral plays at the end and suffered a safety. The Giants’ ground game was a considerable part of what they were doing for a month and a half, at least up until last week. We’re okay spending a little with them on Sunday.

BetAnySports knows how to add to the excitement of NFL football betting. It starts with how easy it is to open an account, with debit card, credit card and person-to-person transfer options, as well as Bitcoin…… Then there is reduced juice, which gives you a better break on the odds, and then if you want to stay with the action even after the kickoff, you’ve got Sports Betting Prime for real-time wagering!