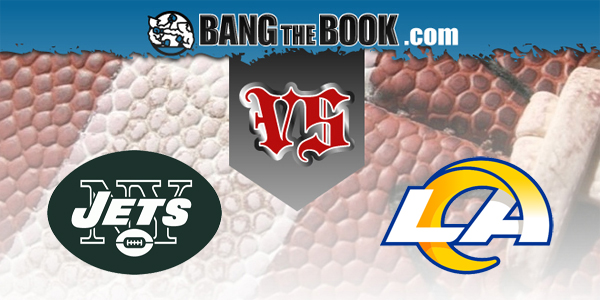 Would there be much of an argument that the New York Jets are the worst team in all of football? It seems a foregone conclusion that they are going to end this regular season with an 0-16 record, and maybe it’s a bit more ho-hum because the Detroit Lions and Cleveland Browns have done so in recent years.

Now they have a Sunday appointment with the Los Angeles Rams, who are very much in a dogfight for the NFC West title with the team that just whipped the Jets – the Seattle Seahawks, with both teams sitting with 9-4 records.

And the pointspread reflects the difference in these two squads, along with the focus level the Rams are expected to have.

We know that the Jets are anemic offensively. They had just a dozen first downs and 185 total yards against Seattle last week, averaging 3.6 yards per play. Sam Darnold had 132 yards through the air, and while the Jets may not be assuming that they are going winless in the end, theyu have to be wondering how much better the offensive outlook might be with a young man like Trevor Lawernce at the helm.

What was especially embarrassing – even emasculating – about the 40-3 defeat was that the Seahawks got some payback for their past encounters, and bad blood, with the organization. We’re talking about safety Jamal Adams, kicker Jason Myers and even quarterback Geno Smith, who got to run the offense in the fourth quarter while Russell Wilson got a big laugh.

And they face a Rams defense that leads the NFL in yards and points allowed per drive, has registered 42 quarterback sacks, and has held ten different opponents to 20 points or less. Last time out, they held the Patriots to just 220 yards and a single field goal.

New York’s stop unit is worn out. They are just 29th in the NFL in yards allowed on a per-drive basis. And they are constantly put in an impossible position by the malfunctioning Gang Green atatck, which is last across the board and has been held to a three-and-out on 27.3% of its drives.

And the Jets have scored touchdowns on just 40% of their chances in the red zone. How bad is that? Well, the next worst team in the NFL is their roommate at MetLife Stadium, the Giants (50%).

This team probably gave up after their last-second collapse against the Raiders, and they’re not the only team that has ever done so. And what good would it do to fire Adam Gase now?

And speaking of Gase, he’s made the decision to come all the way back home from Seattle, and then fly to the West Coast again, which loses them some time and only makes this circus more ridiculous.

Sure, it’s better for this team’s management to “Tank For Trevor,” although we don’t know why general manager Joe Douglas should feel safe in his position. The best thing for this franchise is a clean sweep, although if there is a fan base that has very little patience for a “tear-down, rebuild” process, it’s the one around the Big Apple.

The Jets have been a lousy road dog, covering eight of their last 31 times in that situation. And after last week’s laydown, we don’t have much motivation to grab the points. We’re going in the direction of the total, with New York hard-pressed to score points. UNDER

BetAnySports knows how to add to the excitement of NFL football betting. It starts with how easy it is to open an account, with debit card, credit card and person-to-person transfer options, as well as Bitcoin…… Then there is reduced juice, which gives you a better break on the odds, and then if you want to stay with the action even after the kickoff, you’ve got Sports Betting Prime for real-time wagering!