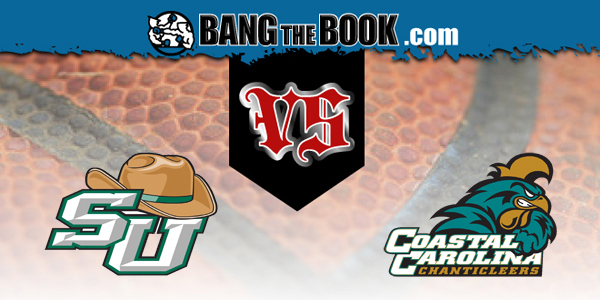 The CBI rages on with Tuesday evening and night action down in Daytona Beach. Stetson and Coastal Carolina square off in the first game, while Pepperdine and Bellarmine meet in the second. We’ll go ahead and break both games down for you today at BangTheBook as we look ahead to Thursday’s continuation of the NIT and Saturday’s first round of Sweet 16 games.

We’ll start with the Stetson vs. Coastal Carolina game, as the Chanticleers have been bet up to -8 at Bookmaker Sportsbook with a total of 148.5.

The Hatters are in the Atlantic Sun Conference and are located in DeLand, Florida, which is just 23 miles west of the heart of Daytona Beach. These are some comfortable stomping grounds for the Stetson program and maybe that was part of the reason why the Hatters played so well in an upset win over Bowling Green to get the CBI started off.

Opinions may be like buttholes in that everybody has one and surely everybody has one about how last night’s game transpired. Stetson, who did not hold an opponent under one point per possession in any of its last five games or in six of the last seven, held Bowling Green to .835 PPP in the 53-52 win. The Falcons were 16-of-47 on two-point shots and 6-of-23 on three-point attempts.

Stetson, usually a good offensive team, only had .851 PPP themselves, going just 2-of-19 from three-point land. This is a Stetson squad that actually shot 36% on threes over the course of the season, but couldn’t throw it in the ocean at the Ocean Center on Monday night. One of the two three-point makes was Rob Perry’s with 23 seconds left that wound up being the deciding basket.

It was the only time Stetson led after the 5:30 mark of the first half. Bowling Green only had four free throw attempts in the game to Stetson’s 14, so maybe there was a little home cooking going on down in the Sunshine State. Stetson also doubled up BG in turnovers with 10 to just five for the Falcons. It is a pretty tough box score to look at because it sure looks like Bowling Green should have won the game.

The spread seems to imply the same, as the -8 number looks a little bit big based on where some of the metrics sites have the game lined.

Stetson played to a 53-52 score. Coastal Carolina played the complete opposite kind of game. The Chants were very much willing to run with Bryant in a 93-82 win. The game was played to 89 possessions, easily the fastest game of the season for Coastal Carolina. Coastal overcame 20 turnovers to get the win, pulling down 15 offensive rebounds to Bryant’s five. The Chants also had nine more free throw attempts, but did only score four more points at the charity stripe.

It will be interesting to see how Coastal bounces back from such an uptempo game. Where Bowling Green and Stetson played a rock fight, Coastal and Bryant basically played paintball on speed. The Chanticleers do not take good care of the basketball, so their 20 TO in a game played to 89 possessions was actually worse than their season average, but their 21.9% TO% ranks 313th in the nation.

Coastal Carolina shoots a lot of threes and pulls down a lot of ORebs, but the team’s real claim to fame is on defense. The Chants are 22nd nationally in eFG% defense and have held opponents to 31.1% from three and 45.3% from two. It is worth pointing out that they have played the 335th-ranked schedule in college basketball, but that is also where we point out that Stetson is ranked 230th by Bart Torvik and 231st by Ken Pomeroy.

Coastal did lead by 20 early in the second half, so while the game was played at a breakneck pace, the Chants were able to lighten up a little bit for stretches of the second half.

What will be most interesting about this game is that 47% of opponents’ shots against Coastal this season have been threes. Stetson is far better at shooting threes than shooting twos and is happy to take a lot of them.

This could be a fun game. Stetson plays at a pretty average tempo, but Coastal Carolina will likely speed them up. Will the Hatters have success getting into an arms race with a Coastal Carolina team that is vastly superior on defense? I think it’s really their only hope.

The total of 148.5 is a big number here, but Stetson should shoot better and Coastal Carolina is happy to bomb away from three. Stetson’s defense is not very good and Coastal should score some second-chance points. Because Coastal is the better team, expect them to dictate the flow and pace of the game.