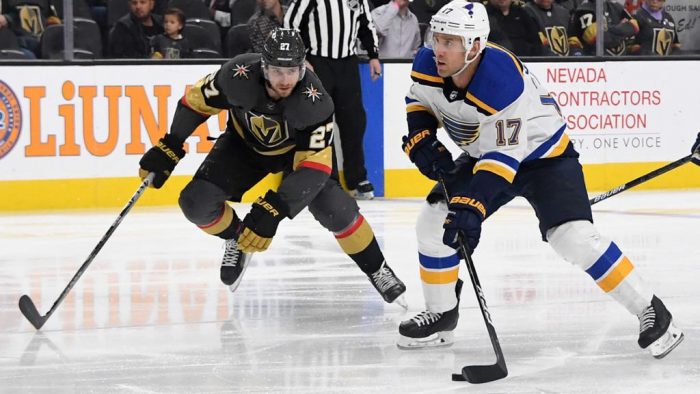 After a Thursday that saw favorites of -220 or higher in every game, we have a few more competitive matchups in the NHL on Friday night. The games with the close lines feature teams that are completely out of it, like Detroit, Columbus, Arizona, and San Jose. The Coyotes are not mathematically eliminated just yet, but the Blues have a six-point edge and three games in hand, so it is basically all but over in the West Division.

Speaking of St. Louis, let’s go ahead and talk about them. The Blues take on the Vegas Golden Knights on Friday night with a 10 p.m. ET puck drop at “The Fortress”, better known as T-Mobile Arena. Vegas is favored in the -165 range per the odds at BetUS Sportsbook with a total of 5.5.

The Blues haven’t exactly grabbed the bull by the horns while controlling their own destiny in the West Division playoff race. After a 14-8-2 start, St. Louis is just 10-11-6 over the last 27 games. Seventeen losses in 27 games doesn’t usually put you in position to be a playoff team, but the West Division bubble is remarkably weak with three really good teams at the top of the division.

St. Louis has points in seven straight games, though, so they’ve done what they needed to do. They lost last time out in a shootout against Anaheim, but still managed to secure a much-needed point. With a back-to-back here against Vegas, a game at Los Angeles on Monday, and then a back-to-back at home against Minnesota to close out the season, points may be hard to come by, but the gap between the Blues and Coyotes seems big enough at this point.

The Blues are 2-3-1 against Vegas to this point. The teams last played on April 5-7 when Vegas won 6-1 the first night and the Blues responded with a 3-1 win in the second game. Jordan Binnington, who will get Friday’s start, has a 2.65 GAA with a .911 SV% and he’ll get the nod here against Vegas. In five games against the Golden Knights, he’s allowed 16 goals on 186 shots.

The Blues are in the position that they are in because of their 5-v-5 play. They are -9 in goal differential at 5-v-5 and tied for the sixth-fewest goals in that game situation. They’re actually fortunate to have that many, as they rank dead last in Expected Goals For at 5-v-5. This team ranks 30th in high-danger chances for percentage (HDCF%), which means that opponents have gotten much better scoring chances than they have.

That makes it pretty surprising that the Golden Knights have had some issues with the Blues. While they’ve won four of the six games, there have been some less-than-stellar efforts in the head-to-head meetings. We should get a pretty good effort from Vegas here. They’re back at home after splitting a four-game road trip and will only leave town once more to face the Sharks on May 12 in a game that won’t mean much of anything.

Vegas is looking to secure the top spot in the West Division, which means hosting these Blues in the first round while Minnesota and Colorado cannibalize each other in the other series. The Carolina Hurricanes look as though they will secure the #1 overall seed, but Vegas can still be the #2 and that would have its advantages.

We should see Robin Lehner for Vegas in this one. Marc-Andre Fleury was the winning goaltender on Wednesday in overtime against the Wild and moved into third place on the NHL’s list of goaltender wins. Lehner and Fleury have basically rotated games religiously since the calendar flipped to April.

It has been another good season for the Sweden native. He has a 12-3-2 record with a 2.27 GAA and a .915 SV%. He’s got a good team in front of him to be sure and is looking to respond from a setback last time out. Lehner allowed six goals on 32 shots on Monday in a 6-5 loss to the Wild. It was a big collapse from all involved, as Minnesota scored three third-period goals, including the tying and winning goals 26 seconds apart late in the game.

The Blues have had a rough schedule lately. Since the start of April, they’ve played Colorado six times, Vegas twice, Minnesota five times, Arizona once, and Anaheim twice. They’re backing into the playoffs for a reason. With Lehner off of that ugly game and the overall team collapse in his last game, they’ll all be looking to make amends tonight.