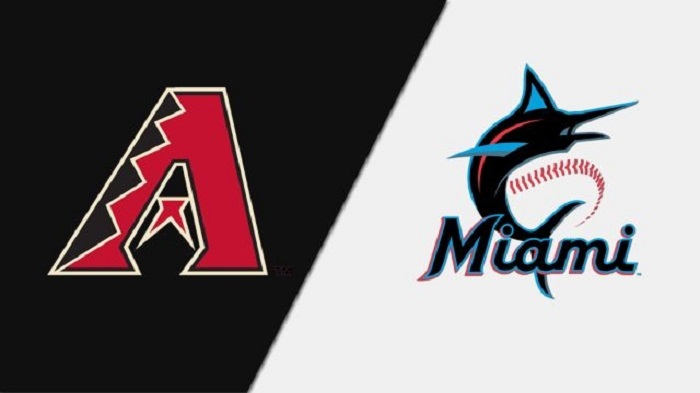 A decent-sized MLB card is on tap for Thursday, as a lot of series will wrap up with getaway day action. There are not many night games to choose from, but we’ve got an early-evening game to consider and that will be the one in focus for this preview.

The Arizona Diamondbacks and the Miami Marlins meet down in South Florida with a 6:40 p.m. ET start time. Pablo Lopez was scheduled to start yesterday for the Fish, but he was pushed back to tonight, where he’ll take on Madison Bumgarner. Bumgarner recently threw a much-debated seven-inning no-hitter in his start against the Atlanta Braves.

Miami is a -125 favorite per the odds at Bovada Sportsbook with a total of 7.5 for this evening’s matchup.

Despite a swarm of early-season injury bugs, the Arizona Diamondbacks are off to a nice start offensively. Last year’s team really sagged in a lot of offensive categories, as the breakout season from Ketel Marte in 2019 failed to carry over to 2020. He wasn’t the only player whose numbers dropped in the bubbled campaign, but he was the most notable.

The fact that Marte has missed ample time this season and Arizona still boasts a borderline top-five offense is a testament to what guys like Carson Kelly, Eduardo Escobar, and David Peralta have done. Prior to getting shut out by Ross Detwiler and the Marlins bullpen on Wednesday, the Snakes were in the top five in wOBA. As play begins on Thursday, they are seventh in that department with a wRC+ that is exactly league average at 100. In this weird offensive season, any team performing at or better than league average is doing well.

One of the biggest things for Arizona is that they’ve drawn a high rate of walks, while still putting a lot of balls in play. Their 9.9% BB% is seventh in the league and their 22.9% K% also ranks seventh. It is a good foundation for an offense if you can draw walks and avoid strikeouts at the same time and Arizona has done that, while also being one of eight teams to have hit 40 or more home runs to this point.

Is Madison Bumgarner fixed? The veteran left-hander allowed 17 runs on 22 hits over his first three starts of the season, only to allow two runs on six hits in his last 17 innings. Bumgarner’s K/BB ratio through three starts was 15/8, but has been 18/2 in his last three. Talk about a tale of two seasons!

Bumgarner has seen a bit of a velo bump of late and maybe the Diamondbacks have fixed whatever was ailing him mechanically. He’s allowed a lot less hard contact in those three starts and has faced the Nationals, Braves, and Rockies, with that Colorado start coming at home. Bumgarner did work seven innings with that no-hitter, but has been limited to five innings in the other two starts, which brings a really poor Arizona bullpen into the equation early.

It was announced around 2 p.m. yesterday that the Marlins would push back starter Pablo Lopez. Lopez had a really good matchup to look forward to against the Diamondbacks in that everything that they do well, he also does well. The Diamondbacks don’t walk. Lopez doesn’t issue walks. Arizona hits home runs. Lopez doesn’t allow many. He also has a lot of swing and miss and a really good command tool that has given him tremendous success the last two seasons.

Lopez has a 2.34 ERA with a 3.13 FIP to start out 2021 in six starts covering 34.2 innings of work. He’s been able to build off of his 3.61 ERA and 3.09 FIP in the shortened season, which served as his breakout year with over a strikeout per inning and huge gains in the command department with a lower HR/FB% and big improvements in terms of contact quality against. Through six starts, his average exit velocity against is only 84.3 mph, which is in the top 6% of the league.

Miami’s offense is always the question. Yesterday’s performance put a little bit of distance between the bottom five and the Marlins in the wOBA department, as they sit at .298 entering play today. Even with the park adjustment placed on their home games, they still grade as a 91 in wRC+, which means that they have been 9% below league average. Miami strikes out too much, doesn’t walk enough, and is one of six teams with fewer than 30 home runs.

Even with that bad offense, though, the Marlins are on the plus side in run differential and appear to be a positive regression candidate that should string some wins together. They’ve done that so far in this series and are looking for the sweep of the Diamondbacks tonight.

What bettors have to determine is whether or not Bumgarner’s recent three-start stretch is a sign of legitimate gains or just a mirage in the desert. We know what Pablo Lopez is at this point in time and he’s able to mitigate mistakes with his home park factor, but he’s been able to eradicate most of them from his starts with that plus command tool and the development of his arsenal. Bumgarner’s recent successes have put an element of recency bias into this line. This price is too low as a result.