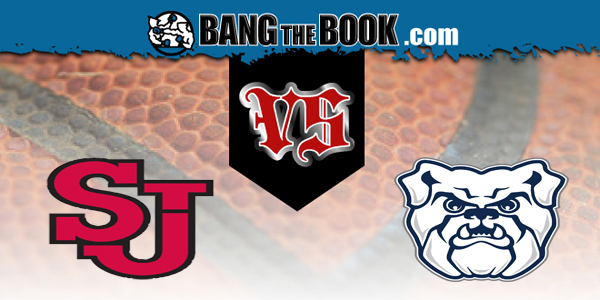 After a really tough week on spotlight games last week, Ohio State gave us a winner to open this week, so let’s hope the bumps in the road from the first week of February are in the rearview mirror. Let’s check in on a new spotlight game tonight, one that features St. John’s at Butler in Big East action.

I think this might be the first Big East game we’ve had this season or at least in quite some time. Games are limited for tonight, but a lot of major conferences are in play and there are some very intriguing matchups on the hardwood.

Butler has grown into a 2.5-point favorite at Bookmaker Sportsbook with a total of 140 for this matchup in Indianapolis at Hinkle Fieldhouse.

St. John’s is rolling right along at this point in time because freshman Posh Alexander has found his game. The 6-footer from Brooklyn opted to stay close to home and his emergence as a legitimate scoring threat has elevated the Red Storm’s profile in a big way. The Johnnies have rattled off six wins in a row. Alexander had three games with at least 15 points over the first 14 games. He’s scored at least 15 in all six of the team’s games during this streak.

As Alexander has gotten hot, sophomore Julian Champagnie from Staten Island has kept up his torrid pace. Champagnie led the team with 24 in last Friday’s win over Providence and has scored 20 points or more in eight games now on the season. With the dynamic duo of Alexander and Champagnie firing on all cylinders, St. John’s has gone from 2-6 in league play to 7-6 in league play and from 7-7 overall to 13-7.

Bettors are fading the Johnnies based on early action, though. St. John’s is a pretty poor defensive team, ranking 280th in the nation in eFG% defense. Opponents are shooting 52.8% on two-point shots and 35.6% on three-point shots. St. John’s does play at a fast tempo in hopes of outscoring teams and they’ve been able to do that because of their TO% on defense.

The Red Storm rank 21st in the nation in TO% at 22.8%. That will be a key for tonight’s game against a Butler Bulldogs bunch that takes very good care of the basketball.

Butler did not take good care of the basketball in the first meeting between these two teams. The Bulldogs had 16 turnovers to just nine for St. John’s in the 69-57 loss. Butler was also just 6-of-24 from beyond the arc. This could be a different Butler team this time around, as East Tennessee State transfer Bo Hodges is in the lineup. Hodges has scored 33 points over the last three games, his only three games of the season.

The hope for LaVall Jordan is that Hodges can provide some consistent scoring punch because Butler simply doesn’t have one. The shot charts on Bart Torvik’s website are littered with red boxes. Butler is only shooting 61.3% at the free throw line. They are only shooting 45.7% on two-point shots, including a poor 55.1% mark on Close Twos. They’ve even missed five dunks. Senior Bryce Nze has had a rough season from the floor. So has fellow senior Jair Bolden, who is shooting 38% from deep, but only 19-of-55 on two-points and just 68% at the stripe.

Jordan just hasn’t found the right mix as of yet. Butler rotates in a lot of guys and now he has to figure out where to work Hodges in. The 6-foot-5 Hodges has played 27, 39, and 31 minutes, so we’ll see if his increased playing time leads to any more efficiency from the Bulldogs.

Butler has also struggled to defend. They rank 288th in eFG% on defense, as opponents are shooting 37% on three-point shots. These are two porous defensive teams, so you would think points could be possible, but St. John’s pushes the tempo and Butler is one of the slowest teams in the country, getting up to 140 could be hard.

I disagree with the line move here and will take St. John’s. Butler beat DePaul last time out, but had 36 free throw attempts to DePaul’s 16 and outscored the Blue Demons 24-9 at the charity stripe. That was effectively the difference in the 10-point win. Butler did not shoot well once again.

St. John’s is humming right along with their top two players in rhythm and they just look like a more cohesive unit. Butler is trying to work on new rotations with Hodges in the lineup and Jordan has been experimenting all season long.