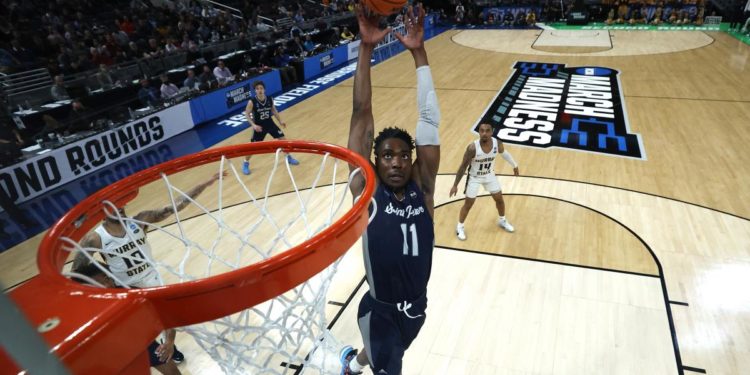 The 2022 NCAA Basketball Championship Elite Eight wraps up Sunday, March 27, with the East Region showdown from Wells Fargo Center in Philadelphia, so we have prepared the best Saint Peter’s vs. North Carolina betting pick and odds.

The Peacocks have never met the Tar Heels before. Saint Peter’s is listed as an 8.5-point underdog on Bookmaker Sportsbook, while North Carolina is a -400 moneyline favorite with a total of 137.0 points.

The Saint Peter’s Peacocks (22-11; 24-9 ATS) became the first-ever No. 15 seed to reach Elite Eight after beating the No. 3 Purdue Boilermakers 67-64 this past Friday. Playing as huge 13-point underdogs, the Peacocks battled bravely on both sides of the ball and fully deserved to extend their winning streak to ten games.

Saint Peter’s held the powerful Boilermakers offense to only 23.8% shooting from deep (5-for-21). The Peacocks also forced 15 turnovers while committing just eight in a return. Junior guard Daryl Banks led the way for Saint Peter’s with 14 points; freshman forward Clarence Rupert posted a line of 11 points, three rebounds, three steals, and a pair of blocks, while junior G Doug Edert added ten points off the bench.

North Carolina upset the odds in the previous two rounds

North Carolina overcame a three-point deficit from halftime against the Bruins. Sophomore guard Caleb Love scored 27 of his 30 points in the second half, while junior big man Armando Bacot posted a double-double of 14 points and 15 rebounds. Bacot has led the way for the Tar Heels so far this season, tallying 16.4 points and 12.6 boards per contest.

I hope there’s still some gas in the Peacocks’ tank. If they put on another strong defensive performance, the Peacocks should be able to keep it close against the Tar Heels and cover an 8.5-point spread. North Carolina’s defense could be a problem, while the Peacocks’ depth should be an X-factor, as head coach Shaheen Holloway loves to play nine guys in his rotation.

On paper, the Tar Heels are a better team than Saint Peter’s, and I’m expecting North Carolina to put an end to the Peacocks’ tremendous run. However, covering the spread might be a tricky job, especially if the Peacocks manage to force the Tar Heels into a lot of tough shots.

While the total has gone under in six of the Peacocks’ last nine games overall, the over is 7-2 in their last nine outings as underdogs. They have to slow things down as much as possible, but the Tar Heels, on the other side, will look to push the ball in transition whenever they can. Hereof, I’ll go with the over, hoping to see a dramatic finish with a lot of free throws on both sides.