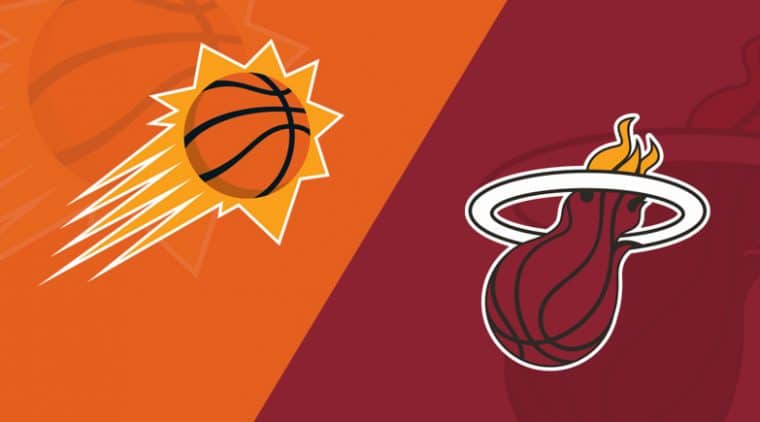 With 12 games on the schedule in the NBA on Wednesday, March 9, let’s take a closer look at the inter-conference tilt between the Phoenix Suns and Miami Heat. The game will be played at FTX Arena in Miami, and here you can get the best Suns vs. Heat betting pick and odds.

The Miami Heat beat the Phoenix Suns in the opening game of the series early in 2022 in the desert, and now are looking to sweep the season series and return the favor to the Suns, who swept the Heat last year. According to MyBookie Sportsbook, the Heat are N/A point home favorites for Wednesday’s encounter, while the total is set at N/A points.

Suns to stay in Florida for one more game

The Phoenix Suns will conclude their three-game road trip with a game against the Heat. It will be the second of a back-to-back set for them after facing the Orlando Magic on Tuesday. After going on an 8-game winning streak and 19 wins out of 20 games, the Suns lost three of the last five. They failed to cover in four of those five games and now stand at a 34-30 ATS record.

However, the Suns are still atop of the Western Conference and have the best record in the entire NBA, and it doesn’t look like it will change anytime soon. They are still playing without Chris Paul (thumb) and Devin Booker (quarantine), but the latter should be back soon. He might be ready to face the Heat on Wednesday.

Heat cemented the top spot in the East

The Miami Heat have been impressive lately; they won 12 of the last 14 games and are lonely at the top of the Eastern Conference. It’s going to be their third of a seven-game homestand, and the Heat opened it with a couple of victories over Philadelphia and Houston.

The Heat are in a full swing and are playing their best basketball of the season. The Suns, on the other hand, slowed down a bit due to the absence of CP3 and Booker, but they are allowed to slip up now and then after the terrific first three-quarters of the campaign. Still, playing the second of a back-to-back could be a problem for the visitors, so I am leaning toward Miami in this one.

The Heat, who have a top 5 defense right now, is playing very well defensively in the past few weeks. They managed to limit the opponents to under 100 points five times over the past month, which is not a frequent case in today’s NBA. The Heat’s D will prevail here.

I already mentioned how good Miami’s defense is as of late, but I’ll add that the Heat is 6th in defensive rating, while the Suns are 4th in that segment. We’re talking about two great defensive sides.

Although both belong among the top 10 when it comes to offensive rating, Kyle Lowry likes to take things slowly on offense, as only the Dallas Mavericks are playing slower basketball than the Heat. Miami averages 95.7 possessions per 48 minutes.

Pick: Go wit the Under