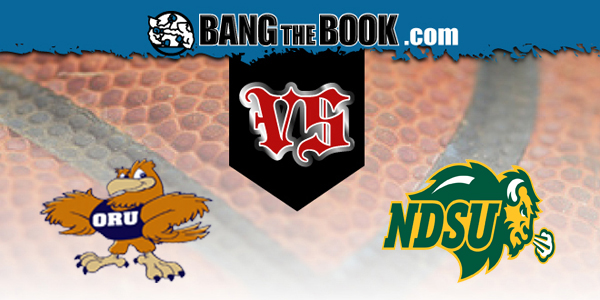 Some regression to the mean has hit the spotlight picks this week in college basketball. It’s been ugly. You’ll have some variance when cherry picking one game a day, even if it’s one of your favorites, so we’ll just have to keep pushing forward.

Coastal Carolina only shot 32.8% from the field last night, despite pulling down 21 offensive rebounds. It is a lot harder to win basketball bets when that happens. Hopefully we get better fortunes on the side or total that we back in tonight’s action.

It is a huge basketball betting board today and the worst day for oddsmakers and risk managers of the season. Prop action is coming in fast and furious and there are well over 100 college basketball games taking money. It is a great day to try to find some value on the amateur hardwood.

Our focus will be on the game between Oral Roberts and North Dakota State. North Dakota State won by seven yesterday and they will look for the sweep on Saturday in this Summit League back-to-back. Odds options were limited with late postings and no overnight lines, but NDSU was -4 with a total of 139.5 at time of writing at BetOnline Sportsbook.

Oral Roberts jumped out to a 6-1 start in conference play before losing the second game of a back-to-back to UMKC by an 81-76 score. You have to give the Golden Eagles credit, as they endured a very challenging non-conference schedule and had competitive losses against Wichita State, Oklahoma State, and to some degree Oklahoma and Arkansas before moving into Summit League action.

Once they got there and played more comparable competition, the wins came. However, they came against some of the weaker teams in this league. The Golden Eagles took a ton of threes early in the season. For the overall campaign, ORU is 26th in 3P Rate at 45.1%, so they’ve taken a lot of threes this year. Ironically, their Assist Rate is just 42.1%, which ranks 333rd in the nation.

It is extremely rare and unexpected to see such a low assist rate with a team that takes a lot of jump shots. Usually teams have to pass the ball around the perimeter to find open looks and guys will rack up assists as a result. Max Abmas is really the only player getting it done in the assist department, averaging 3.6 assists per game.

On the other hand, the Golden Eagles rank 308th in the nation in adjusted defensive efficiency. They are also 310th in ORB% against. This is a team that ranks outside the top 200 defending both the two and the three. In other words, they need to outscore teams to win.

Defense is largely optional in the Summit League, but it is far from a coincidence that the teams that often fare well in this conference are the best defensive teams. One of them is North Dakota State. The Bison don’t force turnovers, but they are a top-100 squad in eFG% against and third in the nation in ORB%. They also play good defense without fouling, as their free throw rate against ranks eighth in the country.

North Dakota State won last night’s game by seven, even though ORU went 11-of-30 from three-point land. Oral Roberts also had just two free throw attempts. North Dakota State was able to take away a big component of ORU’s offense by not letting them get to the free throw line. It was a rather interesting game with a couple of outliers that I wouldn’t expect to carry over to tonight’s game.

NDSU is not a great offensive team, which is a bit concerning given the conference. The Bison did play a very good non-conference slate with Nevada, Nebraska, Creighton, Kansas, and TCU. In conference play, the offensive play has been a good bit better, though not earth-shattering. The Bison do lead the conference in 2P% at 53.1% and are also one of the few teams capable of pulling down some measure of offensive rebounds.

NDSU enters this game second in the conference in 3P% and 2P% defense at 32.1% and 44.1%, respectively. Their defensive numbers were negatively impacted by that non-conference schedule, but they’ve figured things out in conference action. That has been a major contributing factor to the 9-2 start.

Those are the three best defensive teams in this conference. Oral Roberts has been able to pad some numbers against some subpar defensive teams. North Dakota State really dictated the tempo in the first game as well, which forces Oral Roberts to be efficient on those three-point shots and also to lock down defensively because it won’t be a shootout. As I said above, ORU needs to outscore teams to win. That means a faster-paced game. NDSU doesn’t play those.

I’d expect this line to go up a little bit and likely even be posted at 4.5 at some places. I like it all the way up to 6. This is a matchup I isolated early in the week and knew I was going to play at any reasonable number.

GET YOUR SUPER BOWL WELCOME BONUS THIS WEEKEND AT BETONLINE SPORTSBOOK