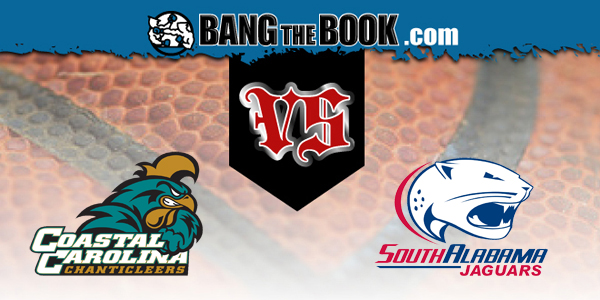 We’ve got a quality Friday night slate in college basketball. There aren’t a lot of standout teams, but a lot of mid-major conferences are in action and there is sure to be some value with a big NBA board and a lot of bettors and oddsmakers focused more on what’s happening with the props and the hoopla for Super Bowl LV.

After a strong week last week, it’s been a tough one this week. We’ll look to get back on track with the February 5 spotlight game featuring Coastal Carolina and South Alabama.

We caught a winner last Friday on the Chanticleers, so why not pick up another one of their games and put it under the microscope? The Chants are -1.5 at Bovada Sportsbook with a total of 147.5.

Planning ahead is an important skill for all handicappers, especially with college basketball. There are a lot of games to attempt to handicap on a daily basis and trying to tackle all of them in one evening or morning is a lot of work. I’ll go ahead and throw a spoiler alert on now, but I isolated Coastal Carolina a week ago Monday as a team to bet on in their next four games.

The Chants would up splitting with Georgia Southern, but not before winning for us on Friday night in lopsided fashion. After a 9-of-20 performance from deep in the first game, Coastal went 5-of-14 from deep in the second game and had a season-high 34.2% TO%. Those two things proved to be too much to overcome in the 62-59 loss.

Coastal Carolina does have something of a turnover problem and it came to the forefront in both games against Georgia Southern. The Chants rank 316th in the country in TO% on offense. That has gone a long way in cutting down their offensive potential and productivity, even though the team ranks 14th in 3P% at 39.5%.

The Chanticleers are also an excellent offensive rebounding team that ranks 15th in the nation in ORB% at 35.7%. It was a big reason why the second Georgia Southern game was as close as it was.

Coastal is quietly a solid defensive team as well. Opponents are shooting 33.4% from 3, which ranks about average nationally, but opponents are only shooting 45.8% on two-point shots. That ranks 50th in the country. Teams are shooting lots of threes against them, which does make this a little bit of a high-variance game.

If you want to talk about teams shooting a lot of threes against an opponent, you want to talk about South Alabama. On the season, the opponents for the Jaguars have taken a three-pointer 57.9% of the time. That’s not a typo. Opponents have shot a three-pointer just under 58% of the time and have done well on those, shooting 36.8%. That ranks 289th in the nation in 3P% defense.

This is the first game since January 23 for South Alabama, as they return following the cancellation of both of last weekend’s games against Georgia State. It was the Panthers that had COVID concerns. Seniors Michael Flowers and John Pettway have played 91% and 85.4% of the minutes this season and fellow senior Kayo Goncalves has played over 75% of the minutes. South Alabama doesn’t foul a lot, simply because they can’t afford to lose any of those three seniors to foul trouble.

The Jaguars also shoot threes very well and they take more of them than Coastal Carolina does. USA is shooting 38.4% from three-point land, which ranks 26th in the nation. They are actually shooting 39.7% from deep in conference play and are also shooting 76.4% on free throw attempts.

Despite being a top-75 team in Block%, South Alabama ranks 301st in eFG% defense at 53.9%. They have been better than that in conference play, so maybe this team is getting a bit better under Richie Riley playing in a very weak Sun Belt Conference, but the Jaguars do have the hardest-remaining schedule in conference play, so those numbers should regress.

These two teams already played twice in Conway, SC and Coastal Carolina swept them, winning 78-65 and 83-69. The Chants were 28-of-69 from deep in those two games. They also ripped down a bunch of offensive boards. It’s hard to see anything going differently in this game. Coastal Carolina should just match up well against South Alabama.

The Chants have a lot of success shooting threes and they should get a lot of clean looks here. The Jaguars are 269th in the nation in ORB% against, so second-chance points could come for Coastal. South Alabama is okay at forcing turnovers, but not nearly on Georgia Southern’s level.

I’ll be on Coastal Carolina here tonight minus the short number.