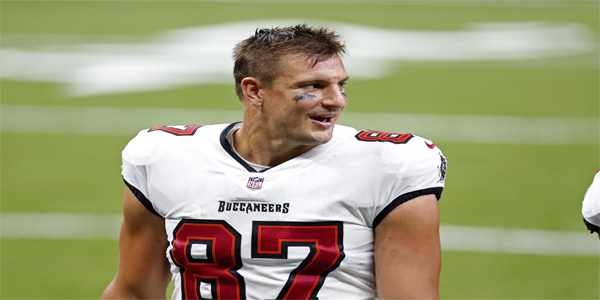 This is always one of the most popular Super Bowl props. Obviously a lot depends on who gets the ball first, especially in a battle between two very potent offenses. And that is what we have here, as the Tampa Bay Buccaneers get together with the Kansas City Chiefs.

Yes, you will find many of the usual suspects listed in this crop by the folks at BetOnline. Tyreek Hill and Travis Kelce and Mike Evans are naturally up near the top. Chris Godwin might present some kind of a value at +1300, since he is a receiver who can go short or give you the big play. And interestingly enough, Scott Miller is the Tampa Bay receiver who has averaged the most yards per reception at 15.2, including a long one from Tom Brady right before halftime of the NFC Championship Game.

Evans leads the way on this team with thirteen touchdown receptions. but tied for second, with Godwin, is someone who is an interesting possibility for us. Not that he is unknown at all.

Rob Gronkowski was brought out of retirement by Brady and the Bucs for one last shot at a Super Bowl, and here he is. Gronkowski did not have one of those seasons that is reminiscent of those upon which he has built a Hall of Fame career, but he did score seven touchdowns. If you remember back in the days with New England, Gronkowski was a favored red zone target of Brady’s, and that has actually been the case in Tampa Bay as well. Gronkowski is actually tied for the most targets in the red zone on this team.

And the Chiefs, who have been pretty stingy against wide receivers this season, can’t seem to have figured out a way to bottle up tight ends. When they are facing players from that position, they have yielded 7.7 yards per target, which is only 22nd in a 32-team league.

And when it comes time to defend in the red zone, tight ends have caught nine of the 25 touchdown passes Kansas City has yielded. If you’re doing the math, that’s 36%. Remember that Gronkowski had six catches for 106 yards against the Chiefs in the Week 12 matchup. That was his highest yardage total of the season. So it is not outside the realm of possibility that he could have some success here.

Within the 20-yard line, Kansas City has allowed 6.1 yards per target to tight ends, and no defense has been less effective in that regard. Of course, this brings the other Tampa Bay tight end into play. Cameron Brate has actually gotten more activity from Brady of late in terms of targets. And there’s no wonder about that, as he has an 82.4% catch rate on the passes where he has been targeted.

I would say there is room for both of these players in our prop. Gronkowski is priced at + 1600 to score the first touchdown, with Brate at + 2000. A small play on both would certainly not be out of order, considering that the Buccaneers might well take the ball if they win the toss, in order to avoid getting into an early hole against the Chiefs.