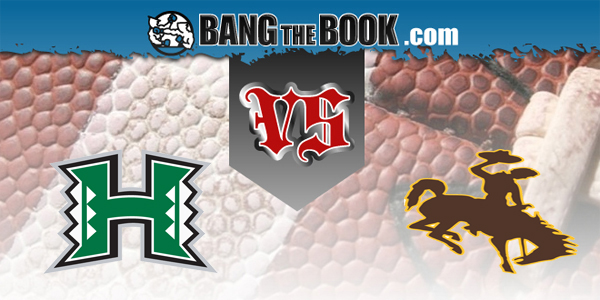 Are we looking at a shift in “culture” at the University of Hawaii? They really used a “ground and pound” to beat Fresno State into submission last week. But Wyoming is very familiar with that style, having employed it for some time now.

Now these teams will meet at Laramie on Friday night, with Fox Sports 1 handling the TV. And BetAnySports customers will have a chance to place wagers in real time with Sports Betting Prime.

If you watched Craig Bohl’s Wyoming offense operate, you would never believe that they produced a first-round draft choice like quarterback Josh Allen. It’s a little primitive, but usually has been in much better shape when being simple enough to highlight some direct quarterback runs. Sean Chambers has been pretty good at that, but they’ve now lost him with a broken leg suffered in last week’s game against Nevada.

Levi Williams took over the reins last week. He is not as good a runner as Chambers, although he offers more in the passing department. He was a pretty good “get” in recruiting. And he was nothing short of outstanding in the Arizona Bowl, as he passed for 234 yards and four touchdowns in a 38-17 win over Georgia State. But he was only in the driver’s seat because Chambers had an ankle injury. Now it appears his stay will be much further extended.
And he’s bulked up by gaining 25-30 pounds with all the time the team had off for the pandemic.

Don’t mistake this guy for Tyler Vander Waal. Williams can do a lot more throwing the ball. But the question is whether Bohl, who won three consecutive FCS national titles at North Dakota State and is known for a pro-style but conservative approach, would be interested in opening things up a little more. This was a 66% running team last year (8th highest rate in nation).

Meanwhile, Hawaii looked like a different team than we’ve seen in the past as they blew away Fresno State in the opener. A team that almost exclusively took to the air suddenly ran the ball 53 times for 323 yards. No, that wasn’t an accident. Todd Graham is the new head coach. And the Rainbows have four veteran offensive lineman who returned for them. Graham likes to play at an accelerated tempo, whether he’s been at Tulsa, Rice, Pitt or Arizona State, and he has a quarterback in Chevan Cordeiro who is very much to his liking.

In Nick Rolovich’s pass-happy scheme (previous regime), Cordeiro would occasionally come in for starting QB Cole McDonald, generally when Rolovich would get frustrated with McDonald’s carelessness with the ball.

But there was something else. Cordeiro is a much different kind of quarterback; not necessarily a straight dropback guy like McDonald but someone who adds the element of the run. And he indeed had 116 yards on the ground last week.

It may be useful for BetAnySports patrons to note that Cordeiro’s collegiate debut came against Wyoming in 2018, when he came in for an injured McDonald and went 19 for 29 for 148 yards and two touchdowns, leading a 17-13 Hawaii victory. That still stings the Cowboys.

We don’t want to sell Hawaii short – not for a minute. They’ve won six of their last seven games, and that includes victories over San Diego State, Army and BYU.

But moving from one game to the next – at least in this case – has been highly problematic.

First, they traveled directly from Sacramento to Denver, rather than go back home. They were encountered by a snowstorm that prevented them from practicing. In Graham’s own words, it’s been close to impossible. “Probably been in my 30 some odd years of coaching the most frustrating time,” said the coach.

We don’t need to point out to you that Hawaii is not used to practicing or playing in that kind of weather. Add to this the fact that the altitude in Laramie is a difference of about 180-degrees from that which exists in Honolulu. And for what it’s worth, Hawaii has covered just five of its last 15 games played on the mainland.

Wyoming has lost some people on defense, including assistants who joined Rolovich at his new job at Washington State. But under Bohl, they’ve usually done a pretty good job against opposition rushing attacks (allowing 3.1 ypc last year, 2.8 in the opener vs. Nevada). In other words, don’t confuse them with Fresno’s sieve-like stop unit. As the dog here, they’re very much at home. WYOMING

BetAnySports is your headquarters for everything you love about college football in the year 2020……. When you access reduced juice, you get a break on the odds, and then Sports Betting Prime allows you to place wagers as the game is in progress……. Open your account with a debit card, credit card, person-to-person transfer or the virtual currency of Bitcoin, which is fast and easy with their automated system and NEVER incurs a transaction fee!