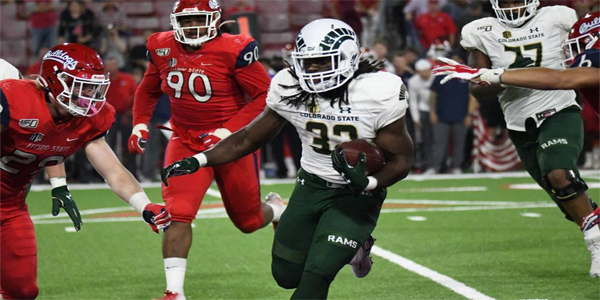 It does not look as if Fresno State is going to be a smoothly-running squad on offense, at least as evidenced by Jake Haener’s effort against Hawaii in the opener. Haener threw three interceptions, and

Kalen DeBoer is generally considered to be a pretty solid offensive mind, having been the coordinator for that unit under Jeff Tedford, and he was nothing but a sensation as a head coach at the NAIA level 67-3 at Sioux Falls).

So he’s got to be climbing the walls over his club’s inability to push over touchdowns in the red zone.

And we have no excuses for the FSU stop unit, and here’s where the worst signs come in. Fresno gave up 323 yards on 53 rush attempts on the part of Hawaii, which is not a program usually associated with keeping things on the ground.

So the guy who might be salivating right now is Steve Addazio, who you may remember from his tenure at Boston College. He is now the first-year coach at Colorado State, and he is going to ram it down an opponent’s throat if he has the capacity to do so.

We don’t know much about this CSU squad from its performance on the field, because they haven’t BEEN on the field yet, with their scheduled game with New Mexico having been postponed. What we CAN tell you is that they have the better QB in this matchup in Patrick O’Brien, who threw for 2803 yards last season. We also know that they lost perhaps one of the best wide receivers in the country in Warren Jackson (1119 yards in 2019), who left early to prep for the NFL Draft.

Oh, and one of the weakest ground games in the nation. Seriously – they were 103th nationally last year.

At the same time, we can also tell you that Addazio ran the ball 67% of the time at Boston College last year, and that was the sixth highest rate in the nation. So we know what he WANTS to do. Without any time to install the new system in the spring, he’s had a quandary.

Word is that CSU has a collection of receivers to pick up the slack after Jackson’s departure, including Dante Wright, and he may have a few twists to throw in there, including former Temple quarterback Todd Centeio, who is more of a “mobile” type.

We’re going to give a slight edge here to visiting COLORADO STATE.

Georgia Southern was not able to impose a ratings “jinx” on Coastal Carolina last week, as they could not make any headway against the Chanticleers in the second half. The result is that CCU now elevates to #20 in the AP poll. South Alabama is not the pushover it has been in recent seasons, and a lesser version of the Jaguars was competitive in last year’s meeting, losing by only three points in overtime. The strange thing about that game, though, was that GSU had 310 yards on the ground and a 22-4 edge in first downs!

Desmond Trotter was not the quarterback for USA that day, and it is hard to deny that he is something of a difference-maker. He is averaging almost eleven yards an attempt and has led victories over Southern Miss, Texas State and Louisiana-Monroe when healthy. No, that is not an impressive list of victims. And they have tallied just 3.5 ypg in the rushing department. But the Jags do a serviceable job stopping the run, and GSU signal-caller Shai Werts is still not really any passing threat. We’ll give Trotter a chance to keep his team in the game until the final gun. SOUTH ALABAMA

BetAnySports is your headquarters for everything you love about college football in the year 2020……. When you access reduced juice, you get a break on the odds, and then Sports Betting Prime allows you to place wagers as the game is in progress……. Open your account with a debit card, credit card, person-to-person transfer or the virtual currency of Bitcoin, which is fast and easy with their automated system and NEVER incurs a transaction fee!