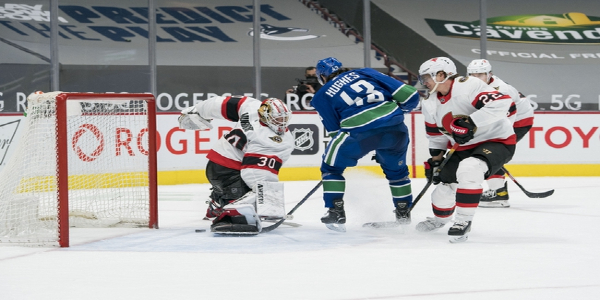 Remember at the beginning of the season we were talking about how bad the Ottawa Senators were? Clearly this was one of the real disaster areas of the NHL season.

But is it possible that the Senators are now turning this thing around a little? Well, judging from their performance last time out against the Vancouver Canucks the other night, they look that way.

Keep in mind that you can get reduced juice at BetAnySports, so you’ll get more value in the odds. And after they drop the puck, you will be able to stay right with the action and make real time wagers using Sports Betting Prime.

Let’s take a look at the odds here. As you will see – and this should be no surprise – the Canucks are the favorites:

When the Senators lost 13 of their first 15 games, there were plenty of calls for the head of coach DJ Smith. The team could not defend. And they weren’t so good on the offensive end either.

But you know, sometimes things turn around for a team, particularly when there are a group of young kids who are just trying to come together.

And it can be said that the Senators are starting to turn the corner.

As is the case in Major League Baseball and the National Basketball Association, there are instances where a team takes to “tanking” in an effort to get the higher draft pick, since they are looking at more in the way of long-term prospects than anything in the short term. And the Senators, who are part of the seven-team North Division – made up of all the Canadian franchises – are in last place, too far out to make a playoff run.

But over their last 30 games that are an even 14-14 in regulation time (they’ve lost twice in extra time), so at the moment, are they all that far behind a lot of middle-of-the-road teams, even some that might be ticketed for the playoffs?

This team is clearly not jumping in the tank. They haven’t given up. In fact, their players are talking about going to the arena every night and having fun.

Certainly the 3-0 win over the Canucks on Thursday night has to be considered “fun.” They got an other-wordly performance by goaltender Matt Murray, who was part of two Stanley Cup-winning team with the Pittsburgh Penguins but is still only 26 years of age.

Murray is not having a great season – his save percentage is under the .900 mark, for example – but after an injury absence, he has come back looking like a changed guy. Murray is 3-0-1 in his last four games, with a pair of shutouts, and he’s had a .967 save percentage over that time.

He’s got better defense in front of him than he did before, and on four different occasions when Vancouver had a man advantage the other night, he turned them back.

Ottawa had lost all five meetings with the Canucks, but the results were different in the two “series” they’ve had. The first time around, in January, they lost three games by a combined score of 16-3. But the two losses that took place in March were both tied at the end of regulation time. And then came the shutout win.

Vancouver still has a playoff chance, theoretically. They were sidelined for about three weeks by the NHL and its COVID protocols, so they have five games in hand on fourth-place Montreal, which is ten points ahead of them in the standings. But this is one of the least explosive teams in the NHL. And maybe they’re not at a point of “sharpness” after just three games back in action, although admittedly two of those were wins over the Toronto Maple Leafs, who were perhaps caught sleeping.

This may not be a bad price for us to take a shot with the underdog.

BetAnySports gives you all the NHL action you can possibly handle. And the really good part is that you can get better odds with reduced juice, as well as real-time wagering through Sports Betting Prime…..And if you are looking for a headache-free method to get involved, Bitcoin is welcomed with open arms, and NO transaction fees!