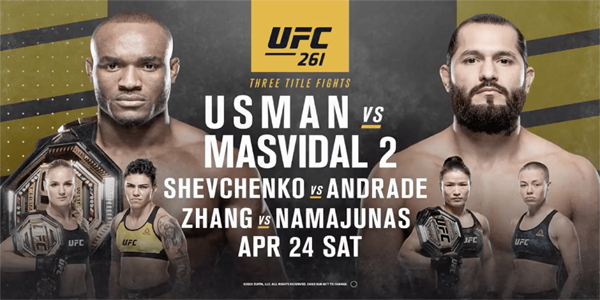 UFC 261 will be a monumental moment in the world of sports. Not only are there three title fights, but the first indoor sellout crowd for a sporting event since the COVID-19 pandemic took hold will be on Saturday at the VyStar Veterans Memorial Arena in Jacksonville, Florida.

We’ve got one perspective on the main event matchup between Kamaru Usman and Jorge Masvidal from Charles Jay, but now we’ll take a look at that fight and a few others on the April 24 fight card. There are a number of intriguing matchups, but the top three are the ones that everybody seems to be most focused on.

We’ll use the odds from BetOnline Sportsbook to find some bets and some betting value for the UFC 261 pay-per-view event.

The first matchup went as a lopsided unanimous decision for champion Kamaru Usman, who won 5-0 in the eyes of two judges and 4-1 in the eyes of another for a couple of 50-45s and a 49-46 in the fight at UFC 251. Based on the betting odds for both the side and total, it doesn’t appear as though a different outcome is expected.

Usman nearly tripled Masvidal in strikes in the first fight. Credit to Masvidal for staying up and not getting knocked out, but it was clearly a one-sided affair. Masvidal has only lost via stoppage three times in his 14 career losses over a total of 49 fights. Hence the -180 and the big favorite number for Usman.

You can cut into the juice with Usman by decision, but it is worth noting that the champ has a couple of knockouts in his most recent scraps. He knocked out Gilbert Burns, who was thought to be a legit contender for the throne in the welterweight division. He also knocked out Colby Covington the fight prior to his win over Masvidal.

We don’t really have any reason to believe that Usman loses this fight. The question is whether or not you bet him straight or look for a prop, like a method of victory or something.

Under 4.5 makes some sense here. Masvidal is not going to beat Usman with a decision. He’ll have to catch a lucky shot or maybe catch Usman in a prone position on the ground to win. Usman’s most likely method of victory is a decision, but a KO is very possible, too.

There are two burning questions for the Women’s Strawweight Championship bout between Rose Namajunas and Weili Zhang. The first is about the challenger. Namajunas has had a couple of lackluster performances of late. She lost the championship to Jessica Andrade in 2019 and then got a measure of revenge with a win in 2020, though the title was already in the hands in Zhang by that point.

Maybe that was a #1 contender match for a chance at belt, so Namajunas earned her chance to get back on the mountaintop. Zhang beat Andrade and then followed it up with a split-decision with over Joanna Jedrzejczyk. Given that Zhang knocked out Andrade just 42 seconds into the fight, it is fair to wonder how things would have gone if the fight had gone longer.

With Jedrzejczyk, Zhang really struggled to secure takedowns. Strike numbers were about even. It truly was a split decision at 48-47 on all three scorecards. That performance wouldn’t inspire much confidence from me in backing her as more than a $2 favorite against a former champion with a higher pedigree. She did what she needed to do to gain the judges’ favor against JJ, but what about here against Namajunas?

Rose should be the aggressor here and fortune often favors the bold. I think the +175 is very much worth a look.

Jessica Andrade tried and failed to get the belt back in the strawweight division. She’s now in the flyweight division. That is where longtime champion Valentina Shevchenko resides. It remains to be seen if it was in Andrade’s best interest to move to flyweight, but one thing we know for sure is that it should be in the UFC’s best interest. Shevchenko has not had a legitimate challenger.

Whether or not Andrade is that worthy challenger, we don’t know. The price implies that she won’t be. Until we see otherwise, I couldn’t bet on anybody against Shevchenko. That makes this write-up pretty easy.

In this fight, we’ve got an accomplished, well-known name in Anthony Smith against a prospect in the light heavyweight division in Jimmy Crute. Crute is only 25 and he’s got some serious potential. Smith is only 32, but he has really struggled lately. He’s lost three of his last five fights and there were some questions about his motivation and focus level to keep going in UFC.

In this matchup, with three title fights, a full crowd, and all the pay-per-view buys, this feels like a spot where the UFC is trying to build up Crute with a “name” win. A victory over somebody that has done some good things in the UFC. A guy that actually went the full 25 during a title shot with Jon Jones.

We’ve seen the UFC do this before and sometimes you can look at the matchmaking strategies for context clues and I think we have quite a few here. Crute is a guy that the promotion thinks highly of and so he gets a headline type of match, but one against a guy that seems to be on the backside of his career already.

Crute is definitely a pick for me and could be a useful parlay piece with Usman if you wanted to go that route.