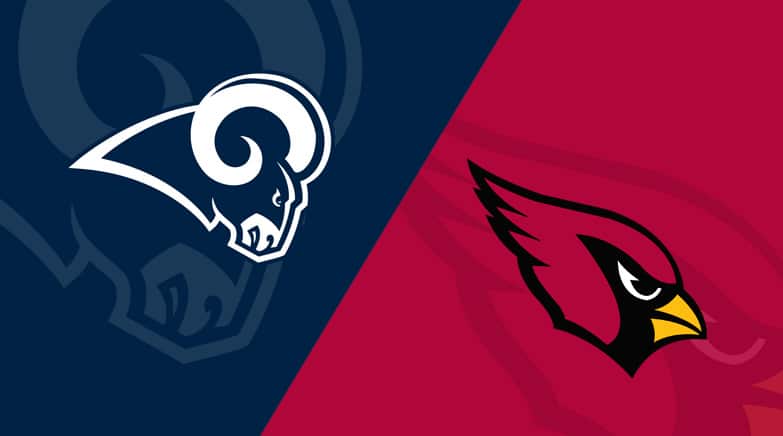 Last Sunday afternoon, all signs were pointing toward the Los Angeles Rams moving into first place in the NFC West. Coming out of a shocking loss in Miami, the Rams had enjoyed their bye week and then beaten Seattle and Tampa Bay in wins that showed the prowess of their defense as well as the explosive possibilities of their passing game.Then they hosted San Francisco, and the injury-riddled 49ers played the spoiler, nailing a late field goal to win, 23-20.

Next up for the Rams is a trip to the desert to play the Arizona Cardinals, who were in first place in that tight NFC West just two weeks ago. Losses to Seattle (not all that unexpected) and New England (wait, what?) have the Cards at 6-5, in need of a win on Sunday to stay in competition in the wild card race.

Take a look at our preview of this NFC West showdown.

Why the Rams Will Win

The Rams have split their last four games, and in the loss to the 49ers, Jared Goff once again showed that when you get pressure on him, he will make mistakes, with a pair of interceptions. He did find Robert Woods seven times for 80 yards, and Cam Akers ran for 84 yards and a touchdown on just nine carries. However, the 49ers got a defensive touchdown and kept Goff running for his life for most of the game.

Why the Cardinals Will Win

If we go back to the Cardinals’ last four games, we see a loss to Miami, a win over Buffalo, and then those losses to Seattle and New England. So if Kyler Murray doesn’t complete that bomb at the end of regulation to knock off Buffalo, the Cardinals would now be 5-6.

In the loss to New England, Murray threw for just 170 yards on a cold day, including an interception. Wideout DeAndre Hopkins caught five passes for 55 yards, and Kenyan Drake ran the ball 22 times for 78 yards and two scores. However, the Cardinals did not have answers for Cam Newton on defense, and the Patriots were able to bull their way to a tough win.

This is a huge game for both teams. Dropping to 6-6 would make it hard for Arizona to get back to a wild card position without sweeping their last four – and they finish the regular season in Los Angeles against these same Rams. If the Rams lose to drop to 7-5, they face New England at home and have to visit Seattle – in addition to hosting the Cardinals. I like the Rams to come out tougher on defense than I think the Cardinals will – they’re just a little farther along on their championship continuum. I like the Rams to eke out a close win.