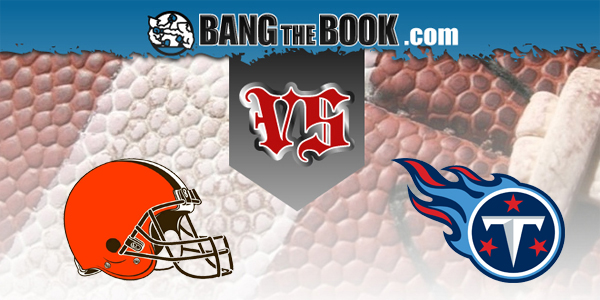 Remember playing “Anything You Can Do, I Can Do Better” as a kid? It feels like the Cleveland Browns and Tennessee Titans are going to play a real-life version of that in an NFL game here in Week 13.

These two teams are pretty similar in how they go about things and you can even compare the personnel across the two rosters and see who’s better, who’s worse, and also see the ways in which these teams mirror each other to some degree.

According to the oddsmakers and the betting market, one team is clearly better and that is the Titans, who are -6 against the Browns with a total of 53.5 at BetOnline Sportsbook for this December 6 matchup.

Is the -6 an accurate description of the gap between these two teams? Is the -6 an indictment of the schedule that the Browns have played so far and how far below the market expectation they have been with an ATS record of 4-7? Is the -6 an indication of how much faith bettors have in the Titans, who have suddenly beaten Baltimore and Indianapolis on the road in back-to-back weeks?

Maybe we read your mind and those are your questions. Maybe you have other questions. Whatever the case, let’s stack these teams up side-by-side and see if we can find a bet to make in this game.

By any measure, the Browns have played a terrible schedule. Jeff Sagarin has them 31st in SOS, better than only the Washington Redskins. Pro-Football-Reference ranks their schedule 14th out of the 16 AFC teams and 29th overall. FootballOutsiders ranks the year-to-date schedule 29th. By comparison, Tennessee falls somewhere in the middle.

Both teams struggle to consistently get pressure, though the Browns do have 13 more sacks than the Titans. The Browns will be without Denzel Ward and Ronnie Harrison in this game, so they had better find a way to get some pressure on Ryan Tannehill.

It is fair to hold it against the Browns who they have played, especially when they’ve failed to cover spreads as a favorite, but we also have to consider that they are getting a six-point head start in this game as a team that has a similar statistical profile to the Titans. Does the difference in opponents make enough of a difference here?

Are people overblowing the fact that the Browns are 8-3 with a negative point differential because they’ve been waxed by the Ravens in Week 1 and the Steelers in Week 6? In those two games, the Browns were combined -63 in point differential. They also committed five of their 12 turnovers.

GET A WELCOME BONUS AND BET THE NFL AT BETONLINE

The Titans have taken great care of the football this season. They’ve only lost one fumble and the quarterbacks have only thrown four interceptions. Tennessee has scored on 47.4% of possessions to this point, whereas the Browns have scored on 39.6%. That is a big deal in any game, but especially this one with an expectation of points with a high total of 54.

The losses of Ward and Harrison, as well as the loss of Sheldrick Redwine and the questionable tag for Andrew Sendejo, mean that the Titans are getting a watered-down version of a Browns defense that has had a lot of problems this season. If this becomes a three yards and a cloud of dust game, there isn’t a big discernible difference between the two teams against the run. In fact, Tennessee, when adjusted for strength of opponents, grades higher in run defense DVOA.

Putting the ball in Baker Mayfield’s hands is the way to beat the Browns, right? That would seem to be the gameplan for Mike Vrabel and his assistants here, but it has been hard to stop the Browns ground-and-pound attack with two backs that can create positive yardage on just about every touch.

A lot of devil’s advocate in that write-up, right? Well, there’s this, but there’s this. Sometimes you just run into that in a handicap. Can we reasonably assume that the Titans will the turnover battle? Yes. The Browns are without some playmakers in the secondary and Tannehill is more trustworthy than Mayfield.

Can we also reasonably assume that both running attacks have success? I sure think so. The Titans can probably take the top off of the Browns defense easier than Cleveland can do that the other way, but the identity of the Titans remains the run. Only the Vikings, Patriots, Browns, and Ravens have thrown the ball fewer times than the Titans.

I have to take Cleveland on the side here getting six points with two teams that are similar, but my favorite play here is the total over 53.5. Both teams should move the ball and have had great success scoring touchdowns in the red zone at 72.7% and 68.6%, respectively.