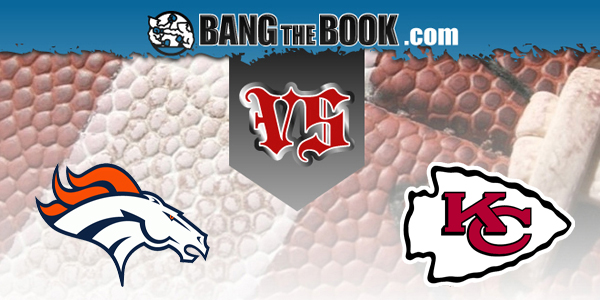 Fans of the Denver Broncos would tell you that the NFL did a very cruel thing to them last weekend. Presumably they are going to be in better shape in this Sunday’s game. In fact, their head coach has made sure of it.

But BetOnline customers may be wondering how much of a difference that’s really going to make as they face off against the defending Super Bowl champion Kansas City Chiefs in an AFC West matchup that takes place at 8:20 PM ET on Sunday night at Arrowhead Stadium.

Last week the NFL shelved all four quarterbacks on the Denver roster – stemming from a positive test for Jeff Driskel and the fear the other three were exposed – and threatened them with a forfeit if they did not field a team despite not having anyone to take snaps.

They were then refused the opportunity to activate assistant coach Rob Calabrese, who had played quarterback at UCF. So they had to use Kendall Hinton, a wide receiver from the practice squad who had once played QB at Wake Forest.

The result was six first downs, 112 total yards and one completed pass in the 31-3 loss to New Orleans. Don’t blame Hinton; this came as a surprise and there was no time to prepare. The NFL’s actions in intentionally putting a sub par product on the field was Draconian and disgraceful.

Of course, detractors would point to the fact that the Broncos didn’t follow protocols, particularly in the quarterback room. Things got a little ugly, as Drew Lock’s mom sent scathing messages about the NFL out on social media. And some of the players weren’t necessarily happy about the way head coach Vic Fangio kind of threw his QB’s under the bus.

Some players were rather vocal about the “double-standard” the NFL exhibited in continuing to push the Steelers-Ravens game back while nailing Denver to the wall.

Meanwhile, Fangio is at least taking some precautionary measures by putting Blake Bortles into a semi-quarantine, just in case. And Kyle Shurmur, a practice squad quarterback for Kansas City last year, was signed for emergency purposes. He is the son of Denver’s offensive coordinator, Pat Shurmur, so it’s safe to say he knows the system.

Lock got back to practice this week, so the way things look now, he’ll be the starter. Reportedly Brett Rypien was back on the practice field as well. So there are probably too many QB’s hanging around at the moment. The Broncos will be without running back Phillip Lindsay, although we’re not sure what a big deal that is, considering he’s had less than 25 yards on the ground in three of the last four games he’s played.

The Chiefs have a current ten-game winning streak over Denver. These last three have been nightmarish, as the Broncos have been outscored 96-25.

And to say the Chiefs are in good form would be an understatement. Last week, Patrick Mahomes (30 TD’s, two INT’s) threw for 462 yards against one of the NFL’s top defenses (Tampa Bay), and Tyreek Hill lit things up early, with seven catches for 203 yards in the first quarter ALONE.

Sure, the Broncos could be real mad at the NFL and that might bring something nasty out of them. But they have also been dealt out of the playoff race, and they don’t exactly have KC’s number. With all the firepower they have, laying the points with KANSAS CITY isn’t crazy at all.

BetOnline has some great things in store for you when you bet Sunday Night Football, with a virtual plethora of props and live in-game betting…….. And remember that Odds Booster offers you greatly enhanced payouts on pre-selected parlays – every day of the week……. The convenience of using digital currencies to open an account is always there, and that includes Bitcoin!