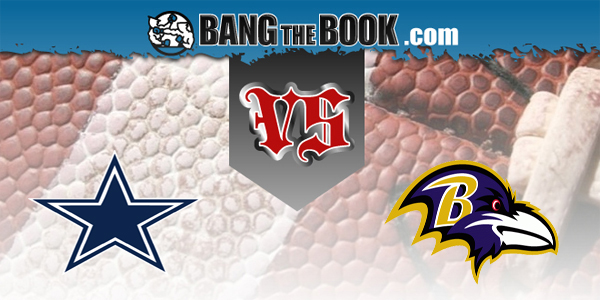 The Baltimore Ravens (6-5 SU, 5-5-1 ATS) have been through a heck of a lot over the last two and a half weeks or so, and although some of this was their own doing, we have seen just how much a team can be disrupted by the COVID-19 pandemic.

On Tuesday night they will play a rescheduled game against the Dallas Cowboys (3-8 SU, 2-9 ATS) at their home venue of M&T Bank Stadium (8 PM ET). And BetAnySports customers can place wagers on this event even after the kickoff with Sports Betting Prime – that is, if you want to keep the action going.

First of all, to answer a question many people were wondering about, Lamar Jackson, the reigning league MVP, will indeed make the start for the Ravens. Or at least that is what we have been told. Jackson had to sit out the last game against Pittsburgh, like quite a few of his teammates who were put on the COVID-19 reserve list. In effect, the Ravens went with a junior varsity contingent to Heinz Field and actually got the cover in a 19-14 loss that was played six days after it had been originally scheduled.

Along with Jackson, the Ravens will have Mark Ingram and JK Dobbins available for duty in the backfield, along with additional offensive linemen like Matt Skura. Defensive players like Pernell McPhee and Calais Campbell have been cleared as well. In other words, without having to go down the whole list, while they are not back to full strength, they are an awful lot stronger in terms of personnel.

And it’s a good thing about Jackson too. Robert Griffin III, who had to fill in against Pittsburgh, injured his hamstring and will be unavailable for the next three games. So Trace McSorley, who threw a 70-yard touchdown pass to Marquise Brown to get the cover against the Steelers, is the backup.

In the NFL odds for this game, as they are posted at BetAnySports, the Ravens are the solid favorites:

Andy Dalton is obviously no stranger to facing the Ravens and their head coach, John Harbaugh. He has gone 8-8 lifetime against Baltimore (while with the Bengals), but you know, out of all the teams he has played more than five games against in his NFL career, this is the one against whom he has the lowest QB rating. Dalton has thrown 21 TD passes with 18 interceptions in those 16 starts.

And while he has been known as a quarterback who holds the ball too long, he has a different dilemma here. Dalton has had to get rid of the ball quickly, simply because his offensive line doesn’t have the ability to protect him. In fact, he threw the ball within 2.08 seconds of the snap in the 41-16 loss to Washington on Thanksgiving Day. That is super quick.

And consequently receivers don’t really have a chance to get into their routes, which might be especially important with a pretty good trio like the Cowboys have in Amari Cooper, Michael Gallup and CeeDee Lamb. Dalton’s Intended Air Yards in these last two games has been 6.1 per throw, which doesn’t cover much ground. That may be Drew Brees’ game, but it doesn’t work quite the same here.

Dallas suffered more offensive line attrition on Turkey Day, as left tackle Cam Erving sprained his MCL, while Zack Martin, an All-Pro guard who had been shifted to right tackle out of necessity, hurt his calf. They won’t be available on Tuesday.

And there is, of course, a ripple effect. There’s an occasional Ezekiel Elliott sighting, but the former NFL rushing champion has averaged just 3.9 yards per carry and has only one game of more than 100 yards.

Meanwhile, a former Cowboy is a part of this story line. Dez Bryant has been getting himself back into football shape, and has caught four passes for 28 yards since he was signed.

He has downplayed previous conflicts with the Dallas organization, which unceremoniously dropped him after three All-Pro seasons in his eight-year tenure. And he’s been giving a lot of “happy talk.” But you know he’s all tuned up for this. And maybe the Ravens need a little “pop” downfield, since we would forecast Dallas is going to try to stop the run first.

Certainly we realize that the Baltimore offense has underperformed. But Dallas’ O-line problems seem too much to overcome. So we are going to lay the points here.