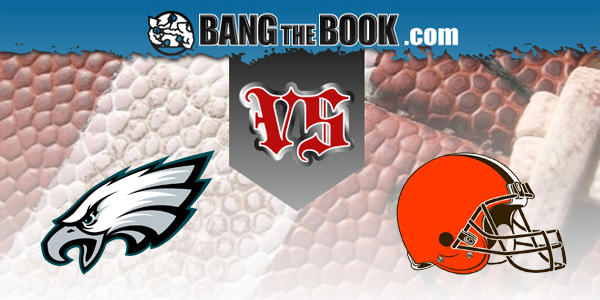 The Eagles (3-5-1 SU, 3-6 ATS) feel a little pressure in their own division (the NFC East), with the Giants looking to make a move. And maybe they are catching Cleveland at the right time, as the Browns (6-3 SU, 3-6 ATS) have scored ten points or less in three of their last four games.

Cleveland, however, has a potent running game, as long as Nick Chubb is healthy enough to team up with Kareem Hunt. Some NFL bettors may be sore at Chubb for stepping out of bounds instead of scoring on a 59-yard run against Houston last week.

But these Eagles are starting to get some players back. Tight end Zach Ertz is still out, and that’s a big void. But Miles Sanders is in the fold, and with the likes of Alshon Jeffery, Jalen Reagor, John Hightower and Travis Fulgham, this is not a bad collection of wide receivers.

Carson Wentz, frankly, has not had a good season. His passer rating is lower than anyone who has made eight starts. He’s averaged 6.1 yards a pass, and been intercepted 12 times. Yes, the boo birds want to see Jalen Hurts starting. And they have also gotten a little upset with Doug Pederson’s play-calling decisions. But that’s the way it often is in the City of Brotherly Love. You just have to wonder if Eagles management and ownership is having a little buyers’ remorse after he got a very big contract extension.

This is the team’s ninth different offensive line combination in ten games. But this combination represents the healthiest they may have had for a while. Left guard Isaac Seumalo is returning after seven games out with a knee injury. Lane Johnson is hurting, but back.

So we’d expect that if Wentz can avoid throwing two INT’s, which he has done five times this season, the Eagles might just be in a good position to improve their #27 ranking among the NFL’s offenses.

We mentioned Cleveland and its ability to run the ball. They are third in the league with 159 yards a game. Yet the Eagles are not only running for just as much per attempt (5.1), there is evidence to suggest they might be able to slow down the Browns’ ground game. Philadelphia, believe it or not, is #1 in the NFL in stuffing running plays. They have either thrown their opponent for a loss or held them to no gain 26.1% of the time.

We’re going to be very interested to see what the Eagles do in terms of pressuring Baker Mayfield. While it’s true he has tailbacks with the capability of keeping defensive lines honest, he is just 40.7% accurate when he is “facing pressure,” officially speaking. And according to the metrics people at Pro Football Focus, there are 37 quarterbacks in the league who have been better under pressure than him.

And the Eagles have 31 sacks, which is third best in the league.

This is not a bad spot for PHILADELPHIA.