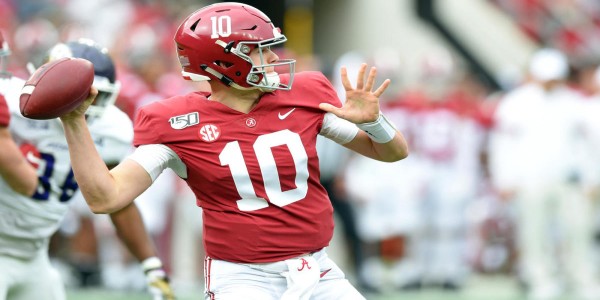 One of the things that is going to make this NFL Draft a lot more fun is that you can engage in draft props that are produced by the folks at BetOnline. Even though we are pretty certain about who’s going to be taken first (Trevor Lawrence, by Jacksonville), what comes after that is not certain at all.

For example, the third pick is owned by the San Francisco 49ers.

Here are the latest odds on who that is going to be:

The 49ers obviously moved into this spot for a reason. And that reason is to draft a quarterback.

It’s not completely because they are dissatisfied with Jimmy Garoppolo. But they are not optimistic about him being part of their future. And he seems unusually prone to injuries.

As the rumor mill stood at one time, the guy they had their eyes on was Mac Jones, who took over for Tua Tagovailoa about midway through the 2019 season, and then had a terrific campaign in leading Alabama to the national title in 2020.

We can tell you that the early mock drafts had Jones well down the board, going late in the first round. But he’s risen. To be honest, there have been some reservations about him among the NFL scouts.

One is that he does not have any mobility. But people like Richard Sherman have commented that he thinks there is a “recency bias,” meaning that because of the success of quarterbacks who can pull the ball down and run with it, The classic dropback QB’s tend to be looked down upon.

And of course, there is that feeling the Jones has had the best athletes around him and that has served to make his performances look better. But you wouldn’t be honest if you didn’t admit that he has added an awful lot to that offense, which was being stewarded by Steve Sarkisian this past season.

We have heard skepticism about the strength of his arm, but Jones threw 15% of his passes at least 20 yards down the field, and produced 18 touchdowns that way. Furthermore, he has completed 64% of his passes that have gone at least 30 yards down the field. He was at the helm of one of the two or three most efficient offenses in the history of college football. And he earned the highest single-season quarterback rating ever from the people at Pro Football Focus.

What has been pointed out time and again is that Jones only made 17 starts as a collegian. But you can’t argue too much with his numbers from the 2020 season – a 77.4% accuracy rate, 41 touchdown passes and only four interceptions.

So why did he go from a favorite of -175 in this prop to an underdog of +120 below Justin Fields at BetOnline? Well, one of those things that emerges every year about one of draftees – in the way of “dirt” – has been revealed about Jones, and critics are taking advantage of it.

It seems that when he was just 14 years old, Jones, for the purposes of a Halloween costume, wore a shirt that said “Nobama” (an obvious reference to then-President Barack Obama) and a wig of dreadlocks. And that went out on Twitter.

So now the speculation revolves around how that politically-incorrect action from eight years ago might affect his draft status.

It should be noted that Nick Bosa was also “captured” with some politically-correct statements – which he actually posted directly to Twitter – which were screenshot before he was able to tear them down. And he was roasted by the woke crowd. But that did not prevent the Niners from drafting him second overall.

Will San Francisco be singing a different tune this time around, only two years later? Perhaps the decision comes down to who fits better into Kyle Shanahan’s offensive vision. Remember that he comes from the same coaching “tree” that has produced Sean McVay of the Rams, who has replaced one dropback passer (Jared Goff) with another (Matthew Stafford).

Pro football lives on at BetOnline, where you can find a virtual plethora of odds on the upcoming NFL Draft. And don’t forget that they have all the NFL futures you need as well…….. Stay on the lookout for Odds Boosters, which give you greatly enhanced payouts for pre-selected parlays, every day of the week…….. And you can open up an account with every method imaginable, including cryptocurrencies like Bitcoin!