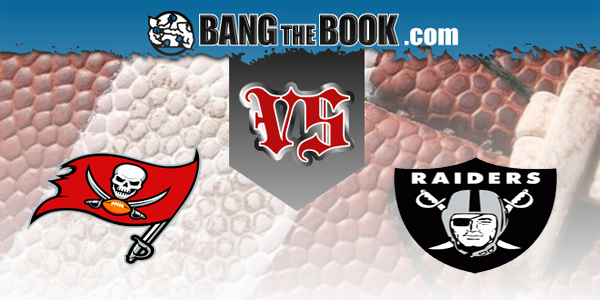 In this season of craziness, the Sunday game between the Las Vegas Raiders and Tampa Bay Buccaneers was surrounded by some uncertainty.

Trent Brown, Las Vegas’ Pro Bowl right tackle, has been diagnosed with the coronavirus, and so contact tracing had to be done. Therefore, the status of other players, including the four other starting offensive linemen, was put in a little doubt.

The game was moved out of prime time, as the league used the “abundance of caution” rationale. The NFL (and NBC) didn’t want to be caught without a Sunday night game if positive tests prevented the game from being played as scheduled. So the kickoff has been moved up to 4:05 PM ET at Allegiant Stadium, the state-of-the-art facility on the Vegas Strip. And the Seattle Seahawks will play the Arizona Cardinals in the night game.

BetAnySports customers get the best of everything, and that includes reduced juice, which offers the chance to avoid having to lay the standard -110 on football, as well as real-time wagering with Sports Betting Prime.

And here are their numbers on Sunday’s contest, with the Bucs established as a road favorite:

Both of these teams are coming off very impressive efforts. The Buccaneers scored a resounding 38-10 win over the Green Bay Packers, while the Raiders took a 40-32 decision over the Kansas City Chiefs.

The Raiders have had a rather efficient offensive situation going for themselves, and at the root of it is the low-risk quarterbacking of Derek Carr, who has thrown just one interception in 176 attempts. He’s well protected, which is why the absence of Brown can be important. But the other guys have been taken off the reserve list – left tackle Kolton Miller, center Rodney Hudson, right guard Gabe Jackson and left guard Denzelle Good. Carr averages 6.9 air yards beyond the line of scrimmage, which places him 26th among NFL quarterbacks.

Jon Gruden has always insisted on running the ball, even if it isn’t producing a lot, because he wants the defense committing resources to stopping it. Josh Jacobs is the one and only go-to guy in the backfield, but he is averaging less than four yards per attempt. Interestingly, the Raiders don’t run a lot of play action; Carr has only thrown 27 passes off it this season. We wonder how much of that could be effective anyway, as Tampa Bay allows just three yards a carry, best in the NFL.

We know what Tom Brady does, and he has tossed just one interception in his last four games. So already there is a difference between this experience and that which they had with Jameis Winston, who threw 30 picks last year. Mike Evans has been on the receiving end of six of Brady’s 14 TD passes. Rob Gronkowski caught his first touchdown as a Buccaneer last week. And Ronald Jones, who a lot of people had questions about, has responded to the challenge of the Bucs having signed Leonard Fournette as he now has 472 rushing yards.

The big difference between these two teams is that Tampa Bay has an honest-to-goodness stop unit. Anyone who had doubts about that saw a litmus test last week against Green Bay, when they held the Packers to 201 total yards and frustrated Aaron Rodgers, holding him to 16 completions in 35 attempts and intercepting him twice. The Bucs are giving up fewer yards per drive than any team in the NFL. And they are in the top ten in the red zone.

We realize that at this point, with Brady aboard, the Bucs are a “public” team and are going to be overpriced more often than not. They are laying points on the road, and that line has been moving upward. But maybe we should consider whether there is such a thing as a “home field advantage” here. The Raiders are in a new home city and in a new ballpark that they don’t know too well. And there aren’t any fans. On that basis, we’re left with the fundamental edges the Bucs possess, which don’t give us much hesitation in laying the points.

BetAnySports has been very well-equipped for Sundays in the NFL. Access reduced juice and get a better deal on the pointspread, as well as the total, and then after the kickoff, you can keep the action going with Sports Betting Prime…… They make it very convenient for you to open up an account; simply use your debit card or credit card, person-to-person transfers or the virtual currency of Bitcoin, which NEVER incurs a transaction fee!