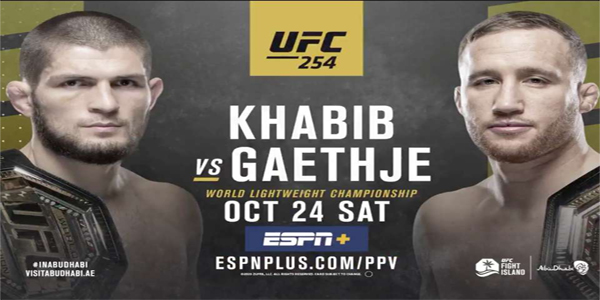 Khabib Nurmagomedov has the longest-running undefeated streak in MMA today. And he may be the most feared competitor in the sport. But he is coming off a long layoff as he steps back into action. BetOnline MMA bettors know that in these crazy times, it’s not all his fault.

On Saturday at UFC 254, he will defend his UFC lightweight championship for the third time against Justin Gaethje at the Fight Island at Abu Dhabi.

Khabib (28-0) has been out of action for a little more than a year, because he’s faced travel restrictions due to the pandemic. He finished Dustin Poirier with a rear naked choke last September. But he is best known for his fourth-round submission of Conor McGregor in October 2018. That established him as arguably the top pound-for-pound fighter in mixed martial arts. He may not be the pound-for-pound pay-per-view champion, but his bout with McGregor drew a reported 2.4 million paid subscribers.

He is two times a World Combat Sambo champion who uses superior strength and athleticism to take control of things and take them to the ground, where he is a fierce ground-and-pounder – perhaps the most ferocious in the business.

Here are the odds on this UFC lightweight title fight, as they are posted at BetOnline:

Gaethje (21-2) was an All-American wrestler at the University of Northern Colorado, but he’s much better known for the work he does in the “stand-up” and it’s no secret that he wants to avoid takedowns. His striking is dangerous, and in fact he’s dispatched only two opponents with submissions, in contrast with Khabib, who has ten official submission wins.

The former World Series of Fighting champion has a loss on his record to Dustin Poirier, Khabib’s last opponent. But last time out, on May 9, he vaulted himself into title position with a fourth-round TKO win over Tony Ferguson, who had himself become known for having five different fight appointments with Khabib fall through.

It’s not likely that this match ends early, but not likely that it goes the distance. That much is evident in the BetOnline props that are posted. You can get a +300 price that it ends in Round 1 (remember, these are five-minute rounds) but you would have to lay a -210 price that it ends sometime inside the distance. For that kind of win, Khabib is a -130 favorite, while with Gaethje it’s +375.

To give you an example of some of the other betting options, if you wanted to place a wager that Khabib would win by fourth-round submission, the same way he took out McGregor, you’d be looking at odds of +1200. Gaethje is priced at +900 to take out Khabib in the first round.

It’s highly unlikely that Gaethje is going to win a points decision, or if the fight went the whole route, that Khabib, who is totally relentless, would lose that way. But Gaethje is +700 to win on a decision, while if you wanted to pick the exact result of Nurmagomedov on points, you could realize a payout at +275 odds if that were indeed to happen.

The whole range of possibilities is open, as far as exact round and exact method. Whichever way you want to bet it, BetOnline has a way for you to do it.

And don’t forget to check out Odds Booster, for knockout payouts on pre-selected parlays every day!