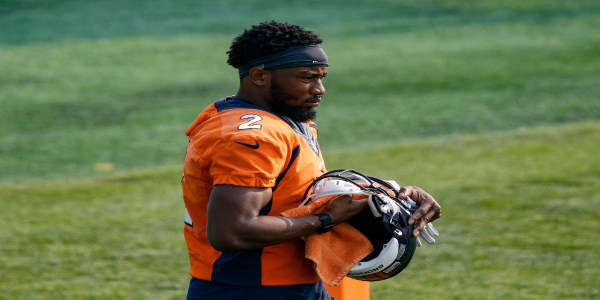 Jeff Driskel has tested positive for COVID-19, and because three other quarterbacks – Drew Lock, Brett Rypien and Blake Bortles – were considered to be in close contact with him, they have been ruled ineligible for Sunday’s game.

So that leaves the Broncos in a quandary, to say the least. They tried to get the game set back to Tuesday, but the NFL, which had made allowances for the Baltimore Ravens-Pittsburgh Steelers game, part of the NBC package, refused to do it.

They also refused the Broncos the opportunity to sign anyone else in an emergency.

And that left them with running back Royce Freeman and practice squad wide receiver Kendall Hinton, an undrafted rookie from Wake Forest, who will get the start.

The big year for Hinton was his junior year of high school, when he threw for 39 yards and five interceptions, and also rushed for 12.5 yards a carry. Over his last two high school seasons, he had over 7,200 passing yards. He holds the Wake Forest record for throwing for the most yards in a career debut and had seven rushing touchdowns as a frosh. He was recognized as someone who could throw the deep ball pretty well. At one point, he had beaten out John Wolford, who eventually became a starter at Wake and is now a backup with the Los Angeles Rams.

Hinton is only a couple of years removed from playing quarterback. He was converted to wide receiver and had 72 catches in his year as a starter. He was also known as a superior athlete playing quarterback, which ordinarily might make him pretty dangerous here.

But the problem is that he has had almost no time to really learn the offense. He was not even part of the regular roster, having resided, as we mentioned, on the practice squad. And this COVID news came suddenly.

To give BetAnySports patrons an idea of how confident the Broncos’ staff is about this situation, they appealed to the league all day Saturday to allow them to suit up quality control coach Rob Calabrese for starting duty. Calabrese played four years at Central Florida (UCF), and he himself was a quarterback who converted to wide receiver, where he had just three receptions. He completed just 46% of his passes and ran for 1.8 yards an attempt.

But because of his involvement with the coaching staff, he has a greater command of the system.

That gives you an idea about how desperate they are.

The NFL turned down their request, because they didn’t want coaching staffs to be “storage areas” for potential players.

They’ll move games, but won’t allow an exception to the rule for an extraordinary circumstance that they ordered. Somehow I wonder if Roger Goodell would have been able to pull this nonsense if the Broncos’ ownership situation had been completely settled and a strong owner was in place.

The likely bottom line here is that not only will the Broncos have to simplify the playbook, they will have to probably rely on packages Hinton used at Wake Forest, just to make things more familiar for him. This may cause a dilemma for the Saints early, which is why taking the points on the first half line (showing Saints -8) may intrigue. But this is quite possibly the worst situation any NFL team has been placed in for quite some time.

Meanwhile, the Taysom Hill “audition” continues. And you better believe Vic Fangio is dialing up some combinations to make Hill beat them with his arm. Last week he drove Tua Tagovailoa out of the game. What will happen here?

The weather isn’t likely to be a factor. New Orleans has won 17 of 20 on the road. Denver tries to make the best of a bad situation, but they may have been beaten by double digits even under normal circumstances. So we might lay the points here.

BetAnySports will keep you plenty occupied with reduced juice, as well a plethora of props and Sports Betting Prime, which enables real-time wagering after the game starts……… And there are plenty of ways for you to open up an account, including your debit card, credit card, person-to-person transfers or the virtual currency of Bitcoin, which is fast and easy with their automated system, and NEVER incurs a transaction fee!