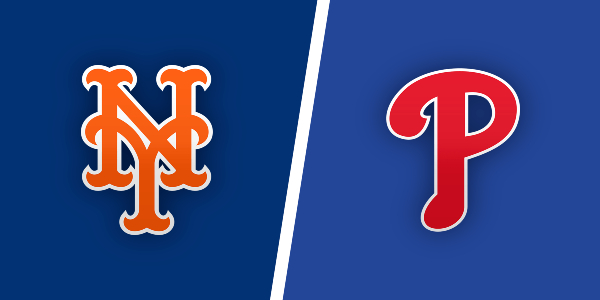 Sunday Night Baseball features a long-running rivalry as the Philadelphia Phillies host the New York Mets. These two teams have been among the many around baseball that have underachieved this season in some way, shape, or form. The Phillies “lead” the NL East with a losing record, while the Mets, who did have some COVID issues early in the year, are also a game below break even.

We’ll see Zach Eflin as a short favorite today as the Phillies and Mets wrap up their weekend set on ESPN. The Phillies are -120 at Bovada Sportsbook with a total that has been bet up to 9. We haven’t seen a lot of totals movement to higher numbers so far this season, so that stands out quite a bit.

David Peterson gets the call for the Mets in this one. The slider-heavy southpaw has already faced the Phillies twice out of his four starts. He’s allowed seven runs on 10 hits in 10 innings over those two outings with 15 strikeouts against two walks. He’s pitched better than his 5.59 ERA would indicate, so maybe this will be a spot for some of that positive regression to seep in.

The total moving up would suggest the opposite, though, as Eflin is the pitcher with the better numbers and likely the better projections. Peterson did just shut down a strong Red Sox lineup with two runs allowed over six innings. Like most pitchers and most things this MLB season, there isn’t a whole lot of consistency from game to game.

The Mets offense is a unit that really should improve in short order. New York ranks 21st in wOBA at .297. The offense has a 92 wRC+, which is 8% below league average. With the talent level on this team, that is entirely too low. The Mets have also been one of the league’s worst offenses with men in scoring position throughout most of the young season.

A distinct lack of power has been the primary culprit. The Mets have only hit 16 home runs and only have a .352 SLG as a team. Only the Tigers have a lower number.

Zach Eflin has pitched well to this point with 13 runs allowed on 33 hits in his 32.2 innings of work. He’s struck out 27 and only walked a couple. Unlike Peterson, Eflin has not faced the opposition here, so that may give him a little bit of an advantage in this matchup. Eflin has faced the Braves twice, St. Louis twice, and also San Francisco.

The numbers for Eflin suggest that he is performing pretty close to expectation. He did just allow five runs in his most recent start, but had eight strikeouts with zero walks, so the stuff was good, but the outcomes were not. He’s been reliably good for the Phillies now for a while and the struggles that he experienced earlier in his career seem to be a thing of the past.

The Phillies offensive struggles of the past have returned. After being a top-10 lineup last season, the Phillies are really scuffling this season and rank 25th in wOBA. Like the Mets, their issue is the absence of power with a .372 SLG. With two offenses that are not faring well in the power department, how this total could be bet up to 9 is pretty interesting to me.

The Mets are clearly the team with the higher ceiling for this season, but they, like so many others, are off to a slow start. It does concern me that Peterson has already faced the Phillies twice, while the Mets have yet to get a look at what Eflin is offering this season. Eflin’s decreased velocity is a bit worrisome with regards to his command, which may be why bettors are on the over for Sunday Night Baseball.

The plus-money price on the Mets is predicated on whether or not the offense can get it going. I’m not sure that’s the case, so it’ll be the phavored Phillies for me.

GET A 100% DEPOSIT BONUS AT BOVADA SPORTSBOOK