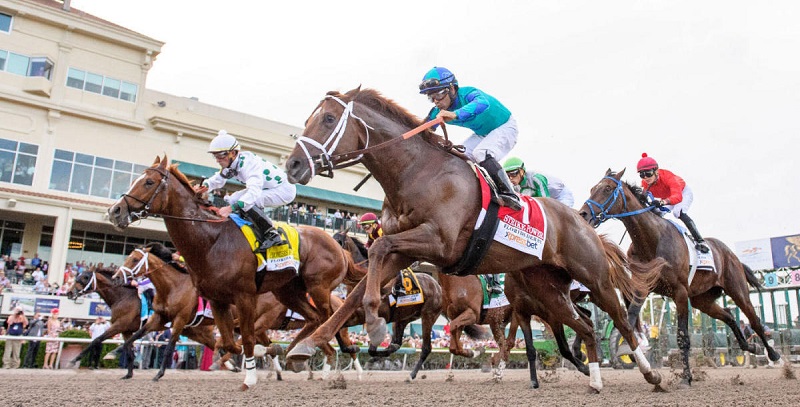 We were wondering if you knew that you could engage in certain kinds of betting on races like the Kentucky Derby that weren’t going to be available at any track.

One of those methods involves wagering on which of the horses is going to finish dead last. And of course it is our friends at BetOnline who are able to bring it to us.

We both know that when you are handicapping a race, you’re going to take some of the entrants and “toss” them, if you will. That means they’re not going to figure in the outcome. And that is a good place to start.

Naturally, you’ve got to allow for the possibility that a good horse might get a bad trip and loaf the rest of the way, or that a jockey might pull up his horse due to an injury.

Not only is this offered in the BetOnline sportsbook, it is the basis for a contest, the $10,000 Kentucky Derby First & Last, in which you have an opportunity to pick both the winner and last-place finisher in the Run For the Roses and get a share of that $10,000 prize.

So if you want to make an evaluation of the worst of those who are running at Churchill Downs on Saturday (6:57 PM ET post time), maybe some of this info will help you.

Let’s talk about some of the “contenders” to bring up the rear, with the odds of that happening and post positions in parentheses (and for your information, Essential Quality is +5000 in this category):

Todd Fletcher entered him for some reason, maybe to get out front and set apace. Who knows. Sainthood did not run as a two-year-old, and has won only a Maiden Special, but was second in the Jeff Ruby Stakes at Turfway Park.

The only gelding in the field. Had some success as a two-year-old, including the Remsen Stakes and a win over Known Agenda. Competed in the Wood Memorial and was an uninspiring fifth.

This will be the first Kentucky Derby for both trainer Daniel Velasquez and jockey Umberto Rispoli.

A winner of just over $200,000. Trainer Wesley Ward has had much success with two-year-olds and stakes races overseas, and has entered plenty of horses in the Breeders Cup. But he has never had a Derby horse. He beat Sainthood in the Jeff Ruby.

This horse is undefeated in three starts, including a victory in the Tampa Bay Derby. Here we have a jockey change, as Julian Leparoux is in the irons. He’s been in twelve Kentucky Derbies, and has yet to hit the board.

Got close, but came second to Helium in the Tampa Bay Derby. Jockey Rafael Bejerano has ridden in ten Derbies, but has yet to finish in the money. Vicki Oliver is trying to become the first female trainer to win the Kentucky Derby.

This is the horse that finished second to Essential Quality in last year’s Breeders Cup Juvenile. But recently lagged behind E.Q.sixteen lengths at the Blue Grass. He’s got a win at Churchill Downs, in last year’s Kentucky Jockey Club Stakes. David Cohen is the first Jewish jockey in this race since 1973.

His trainer, Mark Casse, also saddles Helium, and he is without a finish in the money in eight Kentucky Derby starts. This was the second-place finisher in the Florida Derby (to Known Agenda). And frankly, after just three starts, Soup and Sandwich is looked upon as a sleeper by some decent handicappers. I’m not sure he’s a prime “contender” for this prop.

This is the most experienced entrant in this field (eight starts). He won the Grade I Arkansas Derby and finished third in the Grade I Breeders Futurity last year. Has been out of the money only once in his last seven races. And has gone a mile or more in each of his last five. I’m not sure I would look in this direction.

Kentucky Derby Betting – Does Essential Quality Have a Real Challenger?