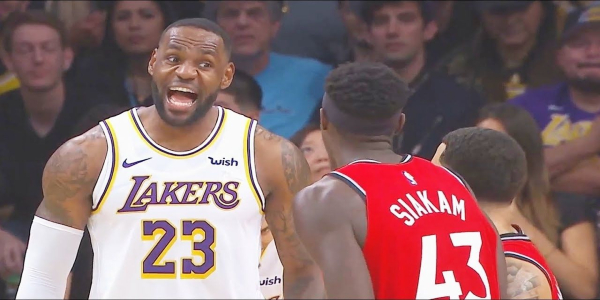 For teams that are used to being in positions of prominence, the end of a disappointing regular season is a tough nut to crack. Take the Tampa Raptors for instance. We call them that because they are playing their season away from home in Florida instead of Toronto, where strict COVID protocols remain in place. A berth in the 2021 NBA Playoffs, even with two extra teams added to the mix, feels like a long shot.

The Los Angeles Lakers will be in the playoffs, but we’ll have to wait and see where they wind up being seeded after missing Anthony Davis and LeBron James for extended periods of time. Finishing sixth or better is paramount to avoid being forced into the league’s play-in tournament, where one or two games may decide your fate.

The Lakers have grown into a bigger favorite for Sunday night’s game against the Raptors. Bookmaker Sportsbook shows Lakers -7.5 with a total of 217. Let’s break it down for you.

It’s become habit to call them the Tampa Raptors, at least in my mind, with what we’ve had to deal with this season. They’ve had a lot to deal with as well. The Trade Deadline was an emotional time with the status of Kyle Lowry hanging in the air. Ultimately, the Raptors decided to keep him and make a playoff push, but it has not worked out.

The Raptors have dropped three in a row now following a competitive effort, but a defeat at the hands of the Utah Jazz on Saturday night. This back-to-back with travel is another reason why the line has increased for this game. The Raptors only scored 13 points in the fourth quarter to lose by four, so they were right there for a big victory, but fell flat over the final stanza.

This isn’t a team devoid of talent by any means, but Lowry has struggled a bit with less to work with. Pascal Siakam has been the team leader in points with 20.6 points per game, but Lowry is down to 16.8 points per contest. He’s still shelling out dimes with over seven assists per game, but Toronto’s offense just isn’t what it used to be.

The Raptors are, however, the only team outside the playoff picture with a positive point differential for the season. They just haven’t been able to win enough close games.

The Lakers will have LeBron James back on the floor for just his second game since suffering a high-ankle sprain that kept him out of action for a long time. The GOAT played 32 minutes in his first game since March 11 on Friday and had 16 points. That was well below his season average of 25.2 points per game, but as you would expect, LBJ was a little bit tentative and a little bit rusty in his return.

He’ll have ample time to get ready for the postseason and it may even benefit the Lakers that he and Anthony Davis will have fresh legs heading into the second season. Speaking of AD, the other Laker scoring at least 20 points per game, this will be his sixth game back since the injury that took away more than two months of his season. He’s averaged just over 17 points per game since coming back.

While the Lakers have those two big-name stars, they are 0-1 with LeBron and 1-4 with AD since they came back. We oftentimes see this from teams. Role players that saw more action relax back into their old ways when the stars come back and the team takes time to gel again. With high usage rates for both LeBron and AD, the offense will go as they go.

Toronto is in a bad spot here. Being on the road in the NBA is still an annoyance with ongoing COVID protocols and restrictions. This is a back-to-back after having played in altitude on Saturday. However, the Lakers are still trying to find their way with their top two players back in the mix.

This has the potential to be a sloppy, disjointed, ugly kind of game. The Lakers have a lot to work on in the halfcourt with their top offensive players back and the Raptors just don’t really have a lot of offense to work with. With that in mind, the under looks like the bet.