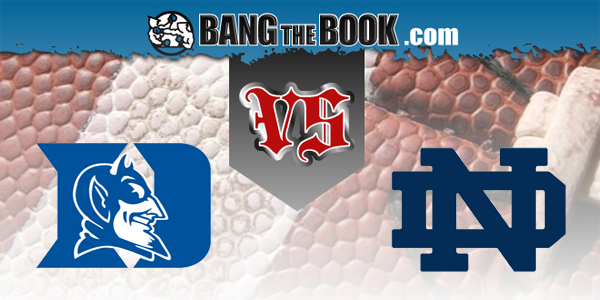 The Notre Dame Fighting Irish have enjoyed a nice resurgence recently, although we can’t be sure how their schedule reshuffling is going to affect their season. They are part of the ACC now, at least for this football season, and they’ll play another conference team on Saturday when they take on the Duke Blue Devils in South Bend. BetAnySports customers can see the game at 2:30 PM ET.

Notre Dame is an independent, so they had to move some things around because of the coronavirus. Accordingly, they came into the ACC, of which they are also a basketball member. They have won 33 of their last 39 games. Last year the schedule wasn’t incredibly challenging, but they only lost to Georgia and Michigan, then beat Iowa State 33-9 in the Camping World Bowl.

This was one of the most prolific offenses in the game, and quarterback Ian Book had the kind of season (especially in the second half) that makes him a Heisman contender. He had 3034 passing yards and a 34-6 TD-INT ratio, and added 546 yards on the ground.

Will this be easier or harder to duplicate? Well, on the one hand, the Irish don’t bring back any wide receiver with more than 13 receptions. And Book is the leading returning rusher. But the offensive linemen are all back, and Notre Dame made a bold choice of former quarterback Tommy Rees as offensive coordinator. So you may want to expect some of the unexpected.

In the NCAA football odds posted on this game by the folks at BetAnySports, Notre Dame is a decisive favorite:

Notre Dame’s defense allowed just 17.9 points per contest, and they were third stingiest against the pass, surrendering only 168.5 yards per game. But there is only one starter returning from the secondary. And if there is some “retooling” necessary on that stop unit, the Blue Devils may find themselves a beneficiary.

Duke was 5-7 last season (4-6-2 ATS), and there is change in the works by virtue of head coach David Cutcliffe now putting himself in charge of the play-calling. He is known to be proficient at working with quarterbacks (both Manning brothers, most notably, and recently Daniel Jones), and his latest project involves molding Chase Brice into this offense. Brice started his collegiate career at Clemson, and saw some action there. Now he will take the reins of a unit that returns some weaponry, including wide receiver Jalon Calhoun and tight end Noah Gray, along with running backs Deon Jackson (641 yards) and Mataeo Durant (4.8 ypc), not to mention an experienced offensive line.

Cutcliffe certainly hopes Brice can help open things up, as Duke not only turned it over too much, but also lacked in explosive plays (only 5.9% of snaps, next to last nationally).

They’ll need better service out of the defense, but they may just get it. Victor Dimukeje (8.5 sacks) and Chris Rumph are outstanding up front. And cornerback Mark Gilbert, an all-conference pick who seemed ticketed for eventual first-round draft status, is back from a dislocated hip. Matt Guerneri, the co-coordinator of the defense, says that he looks like “the same Mark Gilbert that you guys knew and loved before he got hurt.”

Sure, those who gave Duke a chance in last year’s meeting (a 38-7 loss) may have been overly optimistic. But this is a more bloated line, a Notre Dame team that may not be as explosive, and a better Blue Devil squad than a year ago. So we will take the points.

Enjoy the college football season to its fullest with BetAnySports, which gives you better odds through reduced juice, which helps you avoid having to lay the normal -110 on football………. And place your wagers on the game while it is in progress, through the magic of Sports Betting Prime……… Open up your account with a debit or credit card, person-to-person transfer or the digital currency of Bitcoin, which never incurs a transaction fee!