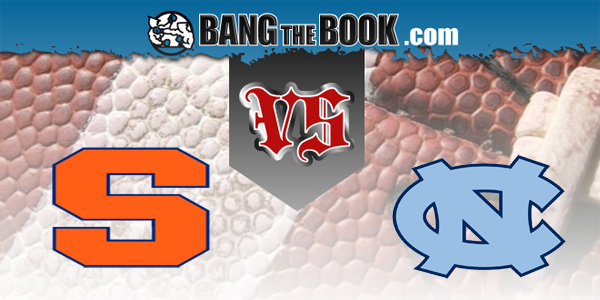 The North Carolina Tar Heels demonstrated the kind of offense last season that indicated they could cut a swath through pedestrian defenses. And well, that would appear to be what they have come across in the opening week of action. On Saturday, BetAnySports customers will see them take on the Syracuse Orange, who are coming off a major disappointment in last year’s campaign, on both sides of the ball.

Game time for this Atlantic Coast Conference encounter is Noon ET at Chapel Hill. And remember that with Sports Betting Prime, you can place wagers on this contest while it is in progress.

Everything looks kind of rosy for this Tar Heel offense. Last year, Sam Howell was second only to Clemson’s Trevor Lawrence in ACC passing efficiency. He threw for 3641 yards and 38 touchdowns with only seven interceptions and he did all this as a freshman.

He got all his top receivers back. That includes a pair who topped the 100-yard mark (Dazz Newsome and Dyami Brown), along with Beau Corrales, who averaged 14.4 yards per reception. Brown was the most explosive of the bunch, racking up 20.3 yards per catch.

Then there is the running back duo of Michael Carter and Javonte Williams, who combined for 1936 yards, averaging more than five and a half yards per attempt. This offense had an “explosive” play on 25% of all snaps. That was tenth-best in the nation.

What’s not to like about all that? On a good day, it appears UNC is the one team in the ACC that could engage in a shootout with the likes of Clemson.

Here are the college football odds that have been posted on this game by our friends at BetAnySports:

Remember that you’ll get additional value by checking out reduced juice. It’s one of the best deals in the business!

Syracuse head coach Dino Babers brought two new coordinators aboard – Sterlin Gilbert on offense and Tony White on defense. While Gilbert is not making radical changes to the up-tempo attack, White is installing a 3-3-5 defense that is employed by a limited number of college coaches, most notably Rocky Long. And without spring practice, this will be harder to embed.

No Power 5 team gave up more sacks than Syracuse, so the offensive line is a problem. Despite this, quarterback Tommy DeVito completed 63% of his throws with 19 TD passes. He’s got some people to work with, like Taj Harris (37 catches, 559 yards) but they’ll miss thousand-yard receiver Trishton Jackson They have a chance to be capable, and the pace may keep some teams off-balance, but trading points with this opponent won’t be easy.

Syracuse’s defense was consistently inept last season. How consistent? Well, they were 109th against the rush and 110th against the pass. They return just four starters, and while the secondary may be the strongest component, that doesn’t mean it is, well, strong. And if they started to learn the new scheme in the fall, they are going to be behind the eight-ball against a squad like North Carolina.

Cynics may suggest that their best shot on offense may be to maneuver kicker Andre Szmyt (Lou Groza Award winner as freshman) into position. But they should dent the scoreboard a little against the UNC stop unit, even with the presence of the heels’ second best quarterback, who is actually their best linebacker (Chazz Surratt, who is All-ACC and could wind up playing in Sundays). But we don’t see the ‘Cuse slowing down this powder blue machine. This adds up to an OVER in our estimation.

BetAnySports delivers all the thrills of college football this season, with reduced juice available to give you a better deal and Sports Betting Prime to keep you right in the action until the final whistle!………. Remember that you have a lot of payment options, including debit and credit cards, person-to-person transfers and the virtual currency of Bitcoin, which is fast and easy with their automated system, and NEVER incurs a transaction fee!