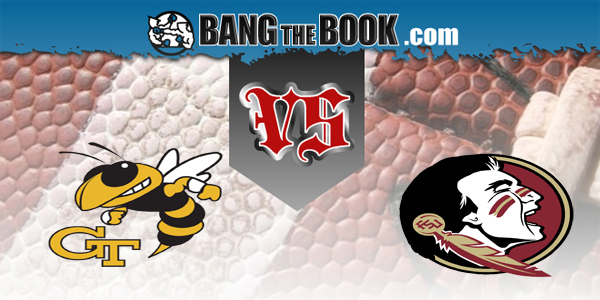 The Georgia Tech Yellow Jackets had a heck of a time adjusting to a pro-style offense after having run the triple option for many years under Paul Johnson. And with short time for practice, their progress may be stunted a bit. In the 2020 season opener, they have to contend with a Florida State Seminoles team that is also adjusting – to a new coach. BetAnySports customers can see this game as it takes place on Saturday at Noon ET at Doak Campbell Stadium in Tallahassee, FL.

Georgia Tech went through its major transition last year, on the way to a 3-9 season (3-8-1 ATS). And we really mean “major.” Very few college teams run the triple option, and when you recruit for that system, you’re recruiting very different people. When Geoff Collins arrived, that transition started to happen. And the Yellow Jackets paid the price. They were last in the ACC in scoring, and 127th among 130 FBS teams in Total Offense.

They couldn’t protect the quarterback, giving up sacks on 15.4% of passing downs. James Graham is not proficient enough to lead this kind of attack (just 45% completions). Offensive coordinator Dave Patenaude says he has not come to a decision as to who will play quarterback, and that the other candidates – Jordan Yates, Jeff Sims and freshmen Tucker Gleason – were all getting snaps in practice. That’s not a great sign.

Whoever’s playing might have a better offensive line to work with, because of the arrival of Tennessee transfer Ryan Johnson. But Devin Cochran, a grad transfer from Vanderbilt who was being counted on, is not going to be part of the team as was anticipated.

In the college football betting lines on this game, as posted at BetAnySports, Florida State is a solid favorite:

Florida State, which finished 6-7 last year (6-7 ATS) after a loss to Arizona State in the Sun Bowl, were displeased enough by the presence of Willie Taggart that they spent $18 million to buy him out. Then they brought in Mike Norvell, one of the younger head coaches in the country (38), who’d made a big splash at Memphis. His teams operate at a swift pace, and that is certainly something to which incumbent quarterback James Blackman (2339 yards, 17 TD’s last year) must adjust.

One thing that has to be swifter is the speed with which Blackman gets rid of the ball. Florida State’s offensive line allowed 48 quarterback sacks last season, and that has to change, despite the fact that they are replacing both tackles. Cam Akers was a game-breaker in the backfield, but he’s gone. And although they have athletes back there, it won’t be the same for a while.

There is a new defensive coordinator (Adam Fuller) and a change back to a four-man defensive front. All-America defensive tackle Marvin Wilson anchors a stop unit that has brought nine starters back. And that defense was tenth best in the red zone (just 46.9% touchdowns allowed). This secondary needs tweaking, as it was among the lower rung of FBS schools. They should improve; cornerback Asante Samuel Jr. and safety Hamsah Nasirildeen are fixtures. Redshirt freshman Jarvis Brownlee has been opening eyes throughout camp. And corner Demorie Tate, their top freshman recruit, has a chance to make a significant impact.

But this team has to develop more discipline under Norvell. They averaged 9.15 penalties per game in 2019, and that was the most in the nation.

We expect that Georgia Tech might be largely dependent on the ground game, at least early. And they have running backs; Jordan Mason (899 yards, 5.2 ypc last year) is a holdover, and great things are expected out of freshman Jahmyr Gibbs .

One can’t be sure that the G-Tech offense will really be humming at any time in the near future, and while we recognize there are plenty of playmakers in the FSU attack, it has to be acknowledged that the defenses will be a little ahead at this point. So the smart play for us here is to go UNDER the posted total.

Enjoy the college football season to its fullest with BetAnySports, which gives you better odds through reduced juice, which helps you avoid having to lay the normal -110 on football………. And place your wagers on the game while it is in progress, through the magic of Sports Betting Prime……… Open up your account with a debit or credit card, person-to-person transfer or the digital currency of Bitcoin, which never incurs a transaction fee!