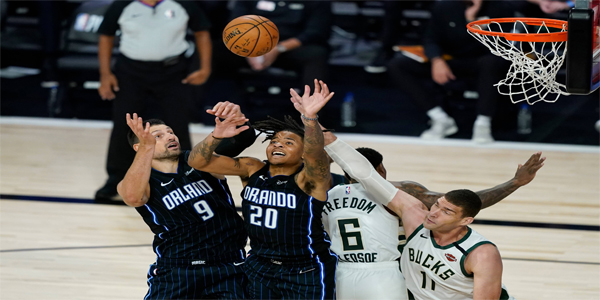 The Milwaukee Bucks got themselves a scare in the opener of their Eastern Conference playoff series against the Orlando Magic, but they have roared back to take the next three games. BetAnySports customers are perhaps expecting that they will be facing the Miami Heat in the East semi-finals, but as they say, it ain’t over ’til it’s over.

On Wednesday afternoon, the Bucks have an opportunity to close things out, and the festivities will get underway at 4 PM ET at ESPN’s Wide World of Sports.

The awesome force for Orlando in this series thus far has been center Nikola Vucevic, an underrated treasure who buried Milwaukee with 35 in Game 1 and 32 in Game 2. The difference was that while his Magic teammates stepped up in the first game, as the Bucks more or less went limp offensively( 43% shooting), coach Mike Budenholzer was able to get a special effort out of his squad to even the series, holding the Magic to just 21% from long range.

Vucevic had 31 points in Game 4, and that was good enough to help Orlando stay within three points going into the final period. But from there it was clearly the Bucks’ game, as they got 21 points from Khris Middleton (who had been struggling) and further exploited a 42-20 edge in points in the paint. So even though the Magic held a 54-51 advantage in points gathered by triples, the final score was 121-106.

Who knows if Steve Clifford’s team has any answers going into this elimination contest. They have been playing without the likes of Jonathan Isaac, Aaron Gordon and former rookie of the year Michael Carter-Williams. Those are three important people to be missing from the rotation.

In the NBA playoff betting odds that have been posted on this game by the folks at BetAnySports, the Bucks are laying quite a few points:

It is clear that Milwaukee has forced Orlando to be largely dependent upon the three-pointer. We’re not saying it’s all that unusual in today’s NBA, but there are teams like the Bucks who can live and survive with that kind of attack. The Magic attempted more than half their shots (45 of 87) from beyond the arc in Game 4.

And Milwaukee, which has one of the NBA’s best teams on the defensive boards, has taken that to a new level, with an 86.7% defensive rebounding rate over the course of the series. They are simply not allowing second-shot opportunities. So the Magic needs to be accurate on a consistent basis.

One player who could have been a critical factor here was former #1 overall pick Markelle Fultz, who has gotten the starting nod at point guard. He’s averaged 11.5 points and 5.3 assists during the series, but he’s shooting just 39% and has gotten to the line only five times. He may be ready for prime time someday, but that day is not today.

The Magic won’t have to travel too far to get home when they leave the bubble, but they should be a desperate squad coming in. We’re not sure they won’t let this one get out of hand, but there is always the chance for a “back door,” even if they don’t play well. We don’t see any Orlando offensive formula working, so even if this is a bit of a blowout we’d lean toward the UNDER here.

Remember that at BetAnySports, reduced juice affords you great value, and with Sports Betting Prime, wagering is available in real-time with their state-of-the-art software…… Open up an account by using a credit or debit card, person-to-person transfer or the virtual currency of Bitcoin, which is fast and easy with their automated system, and NEVER incurs a transaction fee!