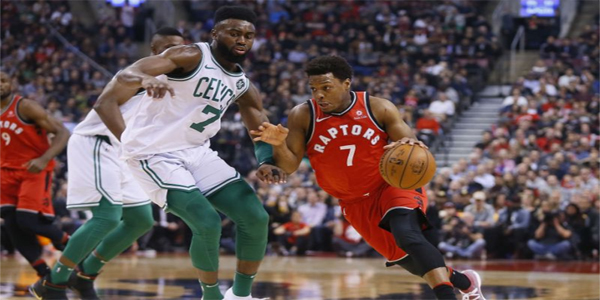 Neither the defending NBA champion Toronto Raptors nor the Boston Celtics can complain that they haven’t been able to get some rest. BetOnline patrons saw both teams sweep their first-round playoff series, although those victories came over opponents who were compromised by injury.

The Celts whipped the Philadelphia 76ers, who had lost their All-Star point forward Ben Simmons, while the Raptors breezed past the Brooklyn Nets, who were playing without, well, most of their roster.

This will be a stern test for both teams. And they have great leadership. Nick Nurse has done wonders with a Toronto squad that lost Kawhi Leonard, the MVP of last year’s Finals, yet finished second in the East, only 2.5 games behind Milwaukee. To say Boston has an overachiever as a head coach would be a vast understatement. Brad Stevens, without any blue chip recruits, took Butler to the national championship game two years in a row. And two seasons ago, he had a great playoff run with these Celtics, even without Kyrie Irving.

This best-of-seven series gets underway on Thursday at 6:30 PM ET. And there will be one day off in between each game, as you can see from the schedule below.

The Raptors had the league’s best Defensive Rating in the seeding games, but they exploded offensively against the Nets, putting up an Offensive Rating of 122.9. This display included a 150-point game to close things out, in which they shot 55% and tallied an even 100 points from the bench. But there was potentially bad news to come out of that game. Starting point guard Kyle Lowry took himself out after only nine minutes of action with a sprained ankle. It is questionable as to whether he’ll be able to participate in Game 1. Lowry will be missed, as he averaged 19.4 points, 7.5 assists and 5.0 rebounds during the regular season. But interestingly enough, the Raptors went 12-2 in games they had to play without him.

This is a team that includes the three-pointer as a major component of their offensive approach. Toronto was sixth in the NBA in three-point attempts, and fifth in success rate. Leading the way for them against Brooklyn was Fred VanVleet, who had a role coming off the bench for them during the championship run but is firmly established as a a starter now. He averaged 21.3 ppg in the first series (just a little higher than Pascal Siakam’s 20.8) and made 19 of 34 from beyond the arc.

As impressive as their ability to make threes is the Raptors’ ability to prevent them. They led the NBA in allowing just 33.7% shooting on triples. And that is exactly what they surrendered against the Nets.

With Ben Simmons out of their lineup, the Sixers committed to shooting triples more, but Boston shut them down, limiting them to just 26.4% from beyond the arc. That is one of the strengths of this team, as they are second best to Toronto in defending treys. But they don’t rely on it as much as the Raptors do.

Perhaps the best news to come out of that first-round series involved Kemba Walker, the All-Star guard who was dealing with a knee injury before the hiatus. But he appears to be in form, as evidenced by 32 points in Game 4 against Philadelphia. There are three players in this lineup who can be considered top-flight scorers – Walker, Jaylen Brown and Jayson Tatum, who averaged 27 points (along with 9.8 rebounds) against Philly. Not in this group is Gordon Hayward, who played under Stevens at Butler and had to leave Game 1 against the Sixers with an ankle sprain. He exited the bubble and will be out at least another three weeks, which means we won’t see him in this series.

Boston has to get some productivity out of the center position. They have two rather undersized people in German import Daniel Theis and Robert Williams, along with 6-10 Enes Kanter, who is more talented offensively than the other two but is unreliable on defense.

Toronto presents a couple of special challenges for the Celtics here. One is that they will force Boston to try to stop their transition game; the Raptors led the league in fast-break points per contest (18.8). And with Marc Gasol and Serge Ibaka patrolling down low, it is going to be extra hard for the Celtics to develop any inside game, since they are not all that imposing up front.

If they are left to shooting long-range jumpers, Boston could be at a loss. The same can be said for Toronto, but they probably have more ways to score buckets. Don’t underestimate the absence of Hayward, as it lands Marcus Smart in the starting lineup. Scoring balance is always a great weapon against teams that can defend like Toronto can, but that injury means less balance. Smart is a great defensive player, but he’s not really a shooter.

The Raptors can also dip into more of a bench, which helps them withstand injuries better. They have at least two or three players who can come off the pines and drop 20 on any given night.

Boston is good enough – and Stevens is resourceful enough – to take this to the wire. But ultimately it’s the Raptors, and we might add that the price for them to win it in seven games is +400 at BetOnline, where you can enjoy a specifically chosen parlay every day with the Odds Booster, where the parlay payouts are “on steroids.” Remember that you can deposit in a lot of ways, including Bitcoin, and the transactions (that’s deposits AND withdrawals) couldn’t possibly happen quicker! Come on over and sign up today!