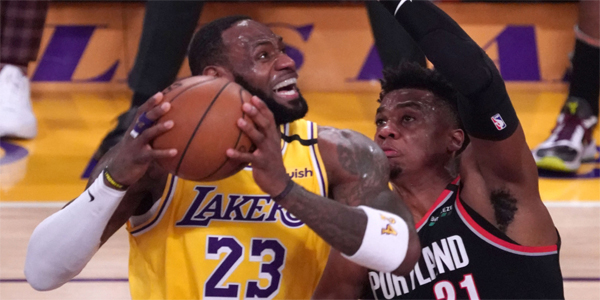 It would have seemed a longshot for the Portland Trail Blazers to elevate themselves to a playoff spot, but you couldn’t blame some BetAnySports customers for giving them a better chance then the other Western Conference teams who were on the outside looking in at the bubble. After all, they were getting healthier. And they have a backcourt that matches just about anything else in the NBA when it comes to firepower.

But even the team’s biggest boosters may not have figured how much firepower they’d really get. So as they enter the post-season as the eighth seed, much of the talk is about whether they can actually pull an upset over the #1 team in the West. And it makes things much more interesting as they get things going against the Los Angeles Lakers.

What Damian Lillard has been able to accomplish in the seeding games has been super-human. That’s not an exaggeration. As this Portland team had to keep winning in order to keep playoff hopes alive, he responded with 112 points in two games, including a career-high 61-point explosion against Dallas, and you could only imagine what kind of eruption there might have been in the Moda Center.

The pressure was two-fold; not only were there the Memphis Grizzlies ahead of them, which meant that they might have to sweep a two-game play-in, but they also had a rampaging Phoenix Suns team on the charge, as they won all their games.

Ultimately, the Blazers overtook Memphis for seventh place, beat the Grizzlies in the play-in, and after going 6-2 in the bubble, are considered to be a “dangerous” squad for the Lakers to face.

Here are the NBA playoff odds posted on this series at BetAnySports:

Where Lillard – and for that matter, his backcourt mate, CJ McCollum – become an even bigger problem than normal for the Lakers is that Los Angeles is missing Avery Bradley and Rajon Rondo, who are potential defensive stoppers. So they’ll be competing against Laker guards who are lower on the depth chart.

The Blazers are better up front than they were before the work stoppage, and it’s the possibility of balance that will bring even more of a challenge to the favorites. Jusuf Nurkic is one of the more talented centers (offensively speaking) and Zach Collins was welcomed back from injury. But Collins is going to have to sit out early in this series.

Could it be that Carmelo Anthony has a last hurrah in him? He can still score 20 on any given night, but this isn’t a team that is starved for that kind of production.

What they will need is a defensive solution, especially against LeBron James, who may not be the leading scorer for the Lakers, but is still the focus of the offense. You can count on them trying different people with different looks against him. Anthony doesn’t necessarily provide answers in that regard, but they’ll throw somebody like Nassir Little at him as well. They’ll go small on occasion with Gary Trent.

But they may also go big. Collins’ absence will give Hassan Whiteside extra minutes, and let’s not forget that when he is right, he is a premier rebounder (13.5 per game) and shot-blocker (2.9 per contest).

Because Lillard is simply red-hot, the Blazers have the possibility of being in every game. They may win one or two in this series, taking advantage of the Lakers’ absences in the lineup.