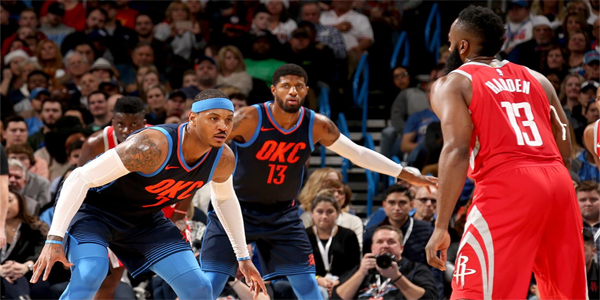 The Houston Rockets (44-28 SU, 33-39 ATS) thought that ideally, they could go into the playoffs with the kind of lineup that could beat its opponents up and down the court, spreading things out and taking advantage of prolific scorers.

As BetAnySports customers are aware by now, they aren’t going into the post-season with all hands on deck. But they’ll improvise as they square off against the Oklahoma City Thunder in a first-round (quarter-final) Western Conference series.

Basically, the Rockets made a trade-off, jettisoning a bigger, less mobile center (Clint Capela) in favor of a non-center (Robert Covington) who would assume the pivot position, for all intents and purposes. One of the things that was essential was that the Rockets put a defensive stalwart in that position, and that is exactly what they have in Covington, who’s been recognized as an All-Defensive team selection.

Truth be told, the Rockets may resemble a hit-or-miss proposition on defense. Their offensive game is based on volume shooting, and that volume is created by three-pointers. Well, that, and the isolation games of Russell Westbrook and James Harden.

Westbrook is going to be missing for the start of this series, and might miss as many as three games, as he has a strained right quad. It remains to be seen if this will handcuff the offense all that much.

In the NBA playoff odds that have been posted at BetAnySports, the Rockets are a favorite, but not by much:

Eric Gordon may be the guy who starts in place of Westbrook, and he’s not had a lot of time after coming back from an injury. Normally, of course, Gordon has the capability of being a top scorer. But there is not necessarily going to be a lot of pressure on him to pick up the scoring slack.

That’s because not only is shoot-first guard James Harden always looking for score, but the Rockets have enjoyed nice contributions from others in the backcourt. Austin Rivers, who’s been a relatively late bloomer, had 41 points during one seeding game. And he’s been reliable off the bench. Ben McLemore, the former Kansas “one-and-done” who was once the seventh pick in the NBA Draft, was a 40% shooter from beyond the arc. So Mike D’Antoni’s team may not be in bad shape from that perspective.

And they are fortunate that PJ Tucker is an iron man. Tucker has nerve damage in his hand, but this Houston team will need his defensive tenacity when dealing with Chris Paul, or maybe even Danilo Galinari.

With regard to pace, it’s going to be incumbent upon Houston to try to force that whenever possible, as Oklahoma City would much rather be involved in a slower situation. If the Rockets could hit the boards a little better, they’d be more than OK. But they may not do too badly on their own end, since OKC has the lowest offensive rebounding percentage in the league.

It would be no surprise if this series went seven games. In that specific scenario, the Rockets are +440 to win and the Thunder are +500 at BetAnySports, where reduced juice affords you great value, and with Sports Betting Prime, wagering is available in real-time with their state-of-the-art software…… Open up an account by using a credit or debit card, person-to-person transfer or the virtual currency of Bitcoin, which is fast and easy with their automated system, and NEVER incurs a transaction fee!