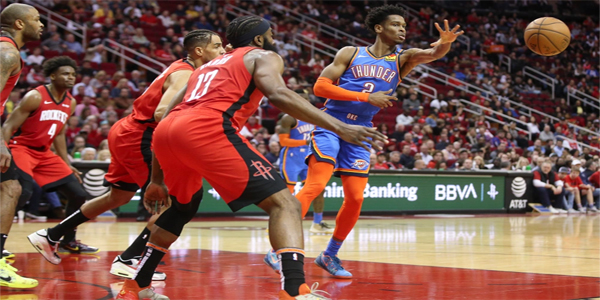 The Oklahoma City Thunder have been sneaking up on their opponents all season long. And as NBA bettors at BetAnySports may already be aware, they have compiled the best point spread record in the league (44-28, which is also their straight-up mark).

There are certainly some interesting back stories as they embark on their first-round playoff series against the Houston Rockets (44-28 SU, 33-39 ATS).

It really was no mistake that Billy Donovan won a share of the NBA’s Coach of the Year award. His team lost not one, but TWO superstars in the off-season, as Russell Westbrook and Paul George headed elsewhere.

But sometimes losing guys who absolutely need to shoot the ball can improve the chemistry, particularly if you were able to replace them with someone who promotes that sort of thing.

Chris Paul, as it turns out, is just the kind of veteran leader who helps everyone else around him. He has also been the ideal guy to have the ball in his hands late in games. Crunch time has actually been good to the Thunder, as they have come out with a win sixteen different times when trailing into the fourth quarter.

Donovan also did some “tweaking” with the construction of the lineup, which often called for three guards on the floor at once. This may be the kind of thing that leaves them in good stead against the Rockets’ smallish lineup.

In the NBA betting odds that have been posted on this series by the folks at BetAnySports, the Thunder are a slight underdog:

Of course, these teams traded stars after last season, so Chris Paul, who didn’t feel appreciated in Houston, gets a crack at some vindication, while Westbrook will face off against his former teammates. Well, maybe; he’ll miss perhaps the first two games with a strained quad.

One major difference between these two teams on the floor will be the fact that OKC will rely a little more on muscle. Steven Adams provides that, and things with him get pretty rough at times. We’ll see how he – or Nerlens Noel, who spells him – will deal with the likes of Robert Covington. The Rockets will undoubtedly look to spread OKC’s defenders out.

While Westbrook will be missing some time, Dennis Schroder, another of OKC’s point guards, is back after leaving the bubble for the birth of a child.

We know it’s not a large sampling, but perhaps it is worth noting that the Thunder were the NBA’s best at defending three-pointers in the seeding games, allowing just 30%. When you are playing against Houston, which, completely by design, attempts more triples than anyone, that is something to strongly consider.

And speaking of defense, Oklahoma City will be greatly aided by the return of Andre Roberson, who missed more than 900 days with a knee injury. When you talk about people who can truly operate on the stop end, he fits the category. So it will indeed be interesting as to how Donovan utilizes him, particularly when it comes to dealing with James Harden, likely to take on more of scoring load early in the series without Westbrook alongside him.

This set of circumstances, from where we sit, doesn’t look too bad for OKC advancing to the next round of play.