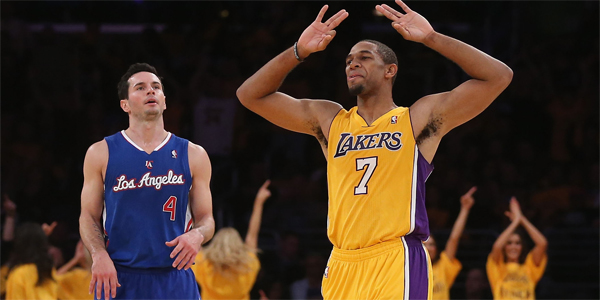 As the NBA packages itself for the restart of the 2019-20 season, they certainly want to come back out of the gate quickly. And part of that is to match up the two top teams in the Western Conference. So BetAnySports customers will see the Los Angeles Lakers and Los Angeles Clippers, who share the same venue, tangling at The Arena on the campus of the ESPN Wide World of Sports Complex near Orlando.

The Lakers (49-14 SU, 35-27-1 ATS) have put together a squad that has the complementary parts LeBron James has kind of been looking for. Part of that plan was to let go of some young talent that hasn’t necessarily been tested in playoff situations – and mortgage the short-term future of the franchise – by giving up a lot to get Anthony Davis, who has not only been the team’s leading scorer but also his usual defensive force in the middle. LeBron is leading the league in assists at 10.6 per game, but he had averaged 30 points a game over his last ten before the forced shutdown.

The Clippers (44-20 SU, 35-29 ATS) have made some bold moves, and that includes the acquisitions of Kawhi Leonard and Paul George. What makes this duo significant is that while they are averaging 48 points per contest between them, they also offer the benefit of a couple of premier defenders. And having been plagued by injuries prior to the start of the season, they can only benefit from the extra rest, from a health standpoint.

In the odds posted at BetAnySports, upon which we will make our NBA picks, the Lakers are the slight favorites:

GET A 50% WELCOME BONUS TO BET THE NBA RETURN AT BAS!

As teams get back in the swing of things, a bench with some substance is going to be a good thing to have. Not that the Lakers don’t have one; there are veterans like Dwight Howard and Danny Green, who have been in playoff situations. But the Clippers have the best group of reserves in the league, when you consider the talents of Lou Williams, Montrezl Harrell, Reggie Jackson and Marcus Morris, among others.

Yeah, that might afford the Clippers an advantage, especially as the Lakers will be missing guards Rajon Rondo and Avery Bradley.

Still, we’d like to focus on something else – the total.

It is the belief here that shooting may not be so sharp coming out of the gate, and this a different location than the arena they both use in L.A. The idea that they will come out on fire doesn’t seem plausible.

But we know these two squads can play defense. And that is something they can carry with them. So scoring is bound to be difficult. You might argue that the team that relies more on the long-distance shots is at a disadvantage. On that basis, it would seem to put us in the column of the Lakers, who have attempted fewer triples.

But you have to look closer.

These teams have played three times, tallying 214, 217 and 215 points. That’s pretty consistent, and you see that the number put up by the oddsmaker reflects that. The Clippers, in the process of winning two of the three meetings, have held the Lakers to 43.5%, 40.6% and 44.8% shooting, all well below their season average.

It is apparent that the Clippers have been successful in taking the Lakers a little out of their game offensively.

In each meeting, the Lakers have exceeded their average in attempts from three-point land, where they ranked 23rd in the league at 31.4 (they were also 22nd in makes and 17th in three-point accuracy). In fact, they averaged almost 38 per game.

As it is, even though these teams both rank over 100 in the “Pace” category (indicating average possessions per 48 minutes), they have both trended toward the “under” (Lakers 52.4%, Clippers 54%). In fact, the only team that has gone under the total more often than Doc Rivers’ team is, believe it or not, the Houston Rockets.

So the conclusions you can draw from this are (a) that they indeed have been effective defensively (which they have, as they are both in the top five in Defensive Rating) and (b) they are somewhat overrated by the betting public (and/or oddsmakers) in terms of sheer firepower.

The feeling here is that should have made an adjustment of some kind downward. We’ll go “under.”

To win the NBA title, the Lakers are +250 and the Clippers are +300 at BetAnySports, which has all the props you’ll need to get off to a great start – or rather, RE-start!……… And remember that live action is fast and furious with Sports Betting Prime, which offers real-time wagering…… Do you like poker? Well, you’ll love The DragonRoom, where they offer 50% Rakeback……. Open your account with a credit or debit card, person-to-person transfers or the virtual currency of Bitcoin, which is fast and easy with their automated system, and NEVER incurs a transaction fee!