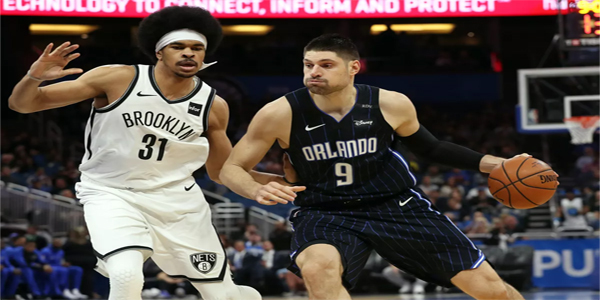 BetAnySports customers might have noticed already that if there is any team that comes into the NBA restart “limping,” it’s the Brooklyn Nets. They are literally without their rotation, or the vast majority of it. And they are a far cry from the team that hopes to be a bona fide championship contender when the new season commences, around December.

But they must soldier on, and when things resume for them on July 31 (a Friday), they take on the Orlando Magic at the HP Field House in the ESPN Wide World of Sports Complex. Tipoff is set for 2:30 PM ET.

The Nets are 30-34 (31-33 ATS) and hold seventh place in the Eastern Conference. But they could be overtaken in this game by the eighth-place Magic (30-35 SU, 31-32-2 ATS), and that is significant, because only seven playoff spots in each conference will be secure; any eighth-place team must be at least four games clear of the #9 team to avoid a “play-in” situation. And the Washington Wizards (24-40) have a chance to creep into that position.

Despite some early rumors to the contrary, Kevin Durant, who injured his Achilles last season (was that still last season?) when the Golden State Warriors were in the playoffs, won’t be returning until a fresh season comes.

Kyrie Irving is injured, although he made an awful lot of noise protesting the restart. Taurean Prince, Spencer Dinwiddie and DeAndre Jordan have tested positive for the coronavirus. Wilson Chandler has opted out, citing the fear of catching the virus. Nic Claxton is out with a shoulder injury.

So who is left?

Well, Caris LaVert, who the Nets see as a star in the making, will get an opportunity to spread his wings a little more. Joe Harris, the three-point marksman, is on hand. So is Jarrett Allen, who’s not a bad pivot man but can’t go up against the better guys in the league.

So at least there’s that.

In the NBA betting odds posted on the opener at BetAnySports, the Magic are favored:

BET ON THE NBA RESTART AT BETANYSPORTS!

We can’t lie to you; what the Nets have after those guys we mentioned is somewhat “rag-tag.” The Nets signed the well-traveled Michael Beasley, who has had something of a choppy career after going second in the draft, but he is going to miss the first five games on a suspension to start things off. Justin Anderson is a possibility to get a lot of playing time at power forward. But Rodions Kurucs is going to get himself another chance. He has been a starter for this team in the past, can hit outside shots and has the ability to go back and forth from power forward to center. He has spent a lot of the season in the G League.

The point guard situation may become interesting. Without Irving and others, the assumption is that Chris Chiozza, a journeyman at best, will get the call. But Jeremiah Martin, an undrafted rookie out of Memphis who has put up nice numbers in the G League, is making a charge, impressing everybody so far in camp.

With minutes likely to be spread out, veterans should play a role here as well. Garrett Temple was already on hand; the 34-year-old LSU product has been all over the NBA and has usually been an extremely dependable defensive player. Lance Thomas, the 32-year-old power forward and Brooklyn native, might be added to the roster. He hasn’t played during this regular season, after being cut by the Nets last October.

Maybe there’s an “X-factor” in the signing of 40-year-old Jamal Crawford, the oldest player in the NBA “bubble.” He’s always been a good scorer and ball-handler, and though he hasn’t played this season, he had 51 points for Phoenix in last year’s season finale (maybe getting the “Kobe finale” treatment?). Crawford is well-accustomed to role-playing, as a three-time winner of the NBA’s Sixth Man award.

Another thing to mention here is that the Nets had fired coach Kenny Atkinson and have interim coach Jacques Vaughn in his place, as they mull their long-term coaching options. And Vaughn will have a limited time to get this patchwork roster on the same page. Yeah, we know the Magic doesn’t have a home court advantage. But they didn’t have to uproot themselves that much to get to the “bubble.” Until these “Wait-Till-Next-Year) Nets show us differently, we’ll be fading them. And we think we are getting the best of it there.

The Nets are 250-1 to win the NBA title, but another thing we may jump us is the +180 price that they are NOT the eighth seed, as it is posted at BetAnySports, which has all the props you’ll need to get off to a great start – or rather, RE-start!……… And remember that live action is fast and furious with Sports Betting Prime, which offers real-time wagering…… Do you like poker? Well, you’ll love The DragonRoom, where they offer 50% Rakeback……. Open your account with a credit or debit card, person-to-person transfers or the virtual currency of Bitcoin, which is fast and easy with their automated system, and NEVER incurs a transaction fee!