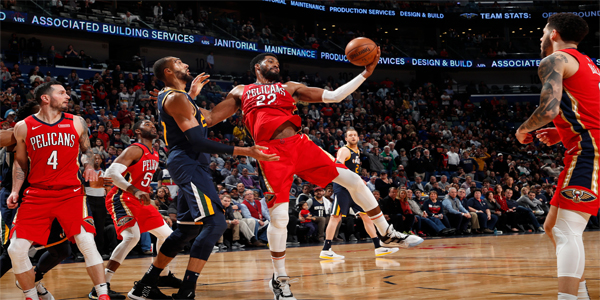 Well, this is the team it all started with, isn’t it?

Upon hearing that there was something called the “coronavirus,” Utah Jazz All-Star center Rudy Gobert was just kind of joking around, making light of things, and before you know it, the NBA had shut down, with all other sports quickly following suit.

Gobert was diagnosed with the virus. Soon afterward his teammate Donovan Mitchell, the other Utah All-Star, was diagnosed as well. And the relationship has been, well, strained, to say the least.

How is this going to affect the Jazz as they undertake to maintain a position in the upper half of the playoff queue in the Western Conference? We’ll start getting answers about that first, since the Jazz kicks things off against the New Orleans Pelicans in the opening game of the NBA restart in HP Field House at the ESPN Wide World of Sports Complex near Orlando.

In the pro basketball odds posted at BetAnySports, the Jazz come in as the underdog:

BET ON THE NBA RESTART AT BETANYSPORTS!

With a 41-23 record (30-32-2 ATS), the Jazz are a game and a half behind Denver and one game ahead of Oklahoma City and Houston as they sit fourth in the West. So things are a long way from settled as we go into this eight-game period before the playoffs start. The Lakers lead things in the conference with a 49-14 mark.

There was a period of adjustment for the Jazz as they brought in a new floor leader this season. Not that they had become so accustomed to a previous floor leader, but it probably required the quietly efficient Mike Conley to adjust his own game more after spending his entire career – a dozen years’ worth – in Memphis.

Scoring is something the Jazz haven’t been in desperate need of. They operate at a deliberate pace, although they are not the slowest team in the league anymore (24th in the “Pace” category). They are are eighth in the league in points per 100 possessions. Mitchell averages 24.2 points per contest, and has been rounding into a budding superstar.

Here’s where the Jazz get hurt a little – the other guy who is averaging over 20 per game is out for the duration. Bojan Bogdanovic (20.2 ppg) injured his wrist and had to have surgery, and he was also hitting a team-high 41.4% from downtown. He was also 90% from the line. How they compensate for that kind of output is a genuine concern.

So head coach Quin Snyder may have to shuffle a little.

Jordan Clarkson (15.6 ppg for Utah after coming over from Cleveland) has been a steady contributor, and maybe they can get a little more out of Joe Ingles, who is just a shade below 40% shooting triples. But maybe this offense will attack the basket a little more, or shoot from mid-range. Utah is fifth in the league shooting two-pointers (53.7%). And 46% of their shots have come from ten feet inward.

The Jazz aren’t going to miss the playoffs. But they are in very real danger of being the seventh seed if they can’t get things together. At the same time, if Snyder can work some magic, they could find themselves vying for the #2 spot, because they are only three games behind the Clippers.

We’re going to move against them here.

There is some intrigue in the over/under figure on wins. We may gravitate toward “Under 4” with Utah, which is priced at -120 at BetAnySports, where they can equip you with all you need to make the “restart” super-interesting……… You have lines on all the game coming out of the chute, along with futures and props……. And don’t forget that when the action starts, you can stick with it all the way through, as you make real-time wagers with Sports Betting Prime………. Get your account opened with a debit or credit card, person-to-person transfer or the virtual currency of Bitcoin, which is fast and easy with their automated system, and NEVER incurs a transaction fee!