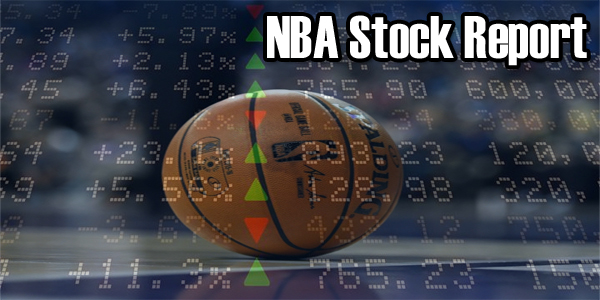 NBA Market Report Buy and Sell: Is It Time to Fade the Lakers?

What Did We Learn from Last Week?

Last week I presented betting opportunities to get bullish on the Indiana Pacers and they did reward us with a modest 2-1 against-the-spread result. Wednesday night in their previous game they took on the Milwaukee Bucks and were installed as 11.5-point road underdogs and were dominated by the Bucks in a 119-100 thrashing. It was a competitive game, during the first half and in the first six minutes of the third period. At that point the Bucks felt it was time to stop playing around and turned up the volume at both ends of the court making the result a certainty.

The Bucks have always been the top-rated team in my own rankings, but now they have extended the margin between them and the teams playing for second place significantly. The only team in the NBA that could put the Bucks in the shocking role of underdog are the Lakers, who they will face tonight in Los Angeles. The line for this game opened at ‘pick’, as expected, but has seen 65% of the bets being placed on the Lakers and moving the line to Lakers favored by one point.

Is There Value in the Bucks or Is This a Trap?

I mentioned in yesterday’s podcast with Adam Burke that the Bucks are like a strong company that has a bullish upward sloping share price that keep moving higher beyond everyone’s expectations. The Bucks are this type of bullish situation. They have not peaked and the performance measures I track in my databases have steadily improved this season. This is horrifying news to the other NBA teams, but good news for us to bet on the Bucks in optimal situations.

I like the Bucks over the Lakers tonight quite a bit.

Are the Pacers Still a Bullish Team?

I do believe the Pacers are a team to bet on and not to fade over the next week. They play the Bulls tonight in Chicago and are favored by 4.5 points and I believe they will win this game by double-digits. The Pacers under head coach McMillan have played well against struggling teams and are 39-18 ATS when facing an opponent that is allowing a 46% or higher shooting percentage and with the game taking place in the second half of the season.

The Pacers then will go through a tough stretch that will help to define their season. After a day for travel the Pacers will take on the Dallas Mavericks, who will be favored by 7 to 8 points. They then return home to host the Boston Celtics in a line that I see opening at ‘pick’ to Celtics being favored by a point. If the Pacers are coming off a loss but covered the spread against Dallas note that they are 5-1 ATS as a home dog in their next game. This is a game I presently think is the best bet on the board for the Pacers during the next week but check my Twitter feed @JohnRyanSports1 for any game day changes.

The Clippers are a Bullish Bet

The Clippers are poised to make a run at the Lakers, who lead the Western Conference and have a 5-game lead over the Clippers. The good news is that they play the Lakers in their next game Sunday at the Staples Center and have the added advantage of knowing the Lakers will be coming off a physical and highly emotional game against the Bucks in a statement game. The Rockets found out just how good the Clippers can be on any given night as they suffered a 120-105 defeat and failed to cover the spread as 1-point home favorites.

Over the remainder of the month the Clippers will play eight teams with losing records and just four teams with winning record paving the way for a significant win streak. Moreover, three of these four games will be at home against the Lakers, Dallas Mavericks March 16, and the Indiana Pacers March 30. So, I think it is financially dangerous to fade them in any game for the rest of the month.

So, I like the Clippers over the Lakers this Sunday as a recommended bet. In addition, I like them this coming Tuesday when they visit the Golden State Warriors and will be lined as eight-point road favorites. I also see the return of Steph Curry getting the public excited to back the Warriors and this too will put downward pressure on this line, which in turn gives us a discounted price tag to back the Clippers.

Steph Curry is a major boost for the Warriors, but it is going to take time for the current nucleus to adjust to his return to the court. In his first game back last night hosting the Toronto Raptors, he played 27 minutes and scored 23 points on 6-for-16 shooting or 38% and was 3-for-12 and 25% from beyond the arc. The result of his game was a negative 13 plus-minus rating, and this reflects the needed time for him to get back to NBA game speed.

Get Bullish on Zion and the Pelicans

Zion’s return to the floor has been a major boost to the Pelicans. They have averaged 116 points-per-game on the season but have averaged 122 points over their last 10 games and 123.7 points over their last three games. Whenever a team’s three-game moving average is above their 10-game moving average, and the 10-day is over the season average, it becomes a solid opportunity to back that team. Moreover, with the return of Zion the increase in their offensive and defense performance measures will continue to improve and will be sustainable over the rest of March.

The Pelicans get their shot tonight hosting the Miami Heat, who lead the NBA with 48 games played having at least five players in double-digits.

The Pelicans are lined as 1.5-point home favorites and I like them in this spot tonight.

The Pelicans are sitting in ninth place and trail the Memphis Grizzlies by three games in the Western Conference standings. With Zion on the floor the Pelicans are a vastly better team than the Memphis Grizzlies, who became the 14th team in the database going back to 1005 that has played three consecutive games in which they never led. That is a remarkable occurrence and does reflect how poor the Grizzlies have been playing and will continue to play down the stretch. This opens the door for the Pelicans to secure the 8th seed of the playoffs.

Can you imagine a one vs eight matchup between the Lakers and their stars AD and LeBron going up against the Pelicans and Zion? It will happen and it could be in the second round. Think about that one for a bit.