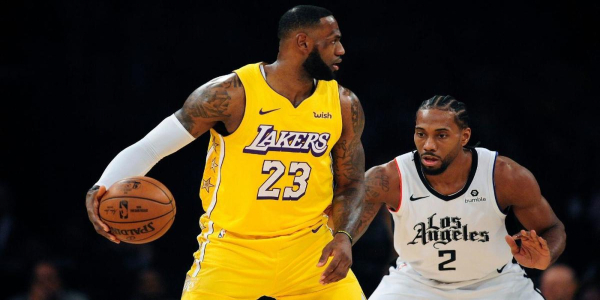 The Los Angeles Lakers like to think that they are even better than they were last season. And maybe they are. It’s going to be a long season – 72 games’ worth, in fact – so it’s likely we won’t have answers early. But we sure can speculate.

When they take the floor against the LA Clippers on Tuesday night (10:05 PM ET), they’ll have something of a different look, but not as it regards the two main guns. LeBron James and Anthony Davis will be present and accounted for as they go up against Paul George and Kawhi Leonard.

And guess what? The Sixth Man of the Year has changed sides.

Interestingly enough, the runner-up for that Sixth Man award is also now in the Lakers’ fold. We’re not sure if Dennis Schroder will be a starter all season long, but if he’s not, the Lakers could have that extra edge the Clippers had last season, which is an ultra-productive bench.

Among the other new faces the Lakers will have is Marc Gasol, who essentially takes the place of Dwight Howard on the roster. Gasol is a former NBA Defensive Player of the Year, just like Howard, but if he’s still got something left, he is an ideal high-post complement to Davis, because he can pass and shoot.

No one is going to accuse Frank Vogel of being some “mad genius.” He’s a capable coach who is fortunate to have two of the better players in the NBA.

As BetOnline customers can probably imagine, Tyronn Lue, who rode LeBron James to an NBA title in Cleveland, has also fallen into a good situation, moving from an assistants’ job into the head coaching position. With George and Leonard, he’s got two cornerstones, but he may only have them for this season, as they could go into the free agent market.

Had Doc Rivers (now in Philadelphia) worn out his welcome? It was painfully obvious that Clippers owner Steve Ballmer, who sees his team moving into a new palace near SoFi Stadium sometime relatively soon, thought he had his title team last year. But the Clips inexplicably blew a 3-1 series lead to lose to Denver in the playoffs. They’ve dealt away some of their draft picks to get to this point, so clearly the future is now.

And what we see in that future is a lot of defense. One of the off-season moves was to bring aboard Serge Ibaka, who had teamed with Gasol in Toronto and was an All-Defensive team member in Oklahoma City. Throw him in their with the pesky Patrick Beverley, one of the best on-ball defenders in the NBA, and the great two-way players, Leonard and George, and some teams are going to have a hard time scoring against them this season.

Will the Lakers be one of those teams? Well, the Clippers didn’t do a bad job defending against their three-point shooting during the last regular season. but the Lakers can accelerate things, as they were second in the NBA in fast-break points per game.

As we alluded to, the Clippers had a great bench last season – producing the most points in the NBA from reserves. With Harrell moving over, that shifts the advantage to the Lakers, who’ll have more flexibility in the moves they can make. Enough that we’ll lay the points here.

BetOnline challenges you with so many wagering options for the NBA, including a lot of props……… And with Odds Booster, you can get greatly enhanced payouts on pre-selected parlays – every day………. No matter what deposit option you want to use, they can take care of you very nicely!