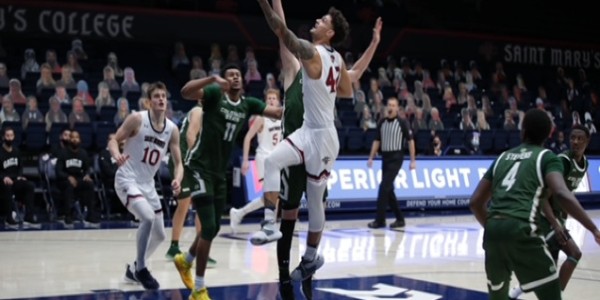 Most college basketball previews that you read today will center on West Virginia vs. Kansas. That’s fine. Nothing against those two teams or that marquee games. Here at BangTheBook, however, we try to be different and have a focus on some of the other games that are out there.

Like Saint Mary’s vs. San Diego State. In the grand scheme of things, this is a more important game anyway. WVU and KU are ticketed for March. They’ll be in the field of 68. Saint Mary’s and San Diego State may not be, but this major non-conference clash on Tuesday night would be a rather large feather in the cap of the winning team.

Per the fine folks at BetOnline Sportsbook, San Diego State is -2.5 with a total of 126 for this matchup that can be seen on CBS Sports Network. The game will be played on the Cal Poly campus in San Luis Obispo.

Let’s check out both sides of the handicap here and see what this matchup has in store.

A lot of people will tell you that if you don’t like offense, then this isn’t the game for you. The fact is that Saint Mary’s and San Diego State do play at really, really slow paces, but the Gaels are one of the best mid-major offenses in the country with regularity. It is a methodical halfcourt offense and in the era of transition and chucking from anywhere, that type of style doesn’t get a whole lot of respect.

During this season’s 8-1 start, the Gaels have shot 54.2% on two-pointers and a respectable 34.4% from distance. The Gaels also rank in the top 50 in TO% on offense. No, they’re not going to light up the scoreboard like West Coast Conference rival Gonzaga, but offensive efficiency goes a long way.

The Gaels will be looking to find that offensive stride after a really poor performance against Colorado State last time out. Saint Mary’s only scored 53 points on 22-of-60 shooting. They took 31 threes, the second-most attempts from beyond the arc, and only made seven. The upshot is that Saint Mary’s only allowed 33 points over 64 possessions to the Rams to secure the 20-point victory.

Fifty-three points probably won’t get it done here, but Randy Bennett had to be extremely pleased with the team’s lockdown defensive effort on a night when offensive frustration could have leaked over to the other end of the floor.

Saint Mary’s ranks 25th in the nation in 2P% defense. San Diego State ranks 64th in percentage of field goal attempts coming from beyond the arc. This handicap is about how the Gaels offense bounces back and how SDSU shoots from deep.

The Aztecs are hoping to bounce back from their first loss of the season. BYU felled the previously unbeaten team by a 72-62 score. The Cougars held SDSU to .949 points per possession. Pepperdine held the Aztecs to .939 PPP two games prior. Those two lackluster data points would seem to go against what we saw from SDSU in wins over UCLA and Arizona State.

It makes sense that the Aztecs offense would be a little hit or miss. With a high rate of three-point shots, sometimes the ball goes in the cylinder and sometimes it doesn’t. Against Pepperdine, SDSU was 2-of-19 from deep. They were 9-of-25 against BYU, but only 12-of-32 inside the arc.

Senior Matt Mitchell has been great to this point, but every Batman needs a Robin. Last year, Flynn was Batman and he was able to make all of the Robins better. Mitchell hasn’t gotten consistent support from his teammates and head coach Brian Dutcher has been tinkering and toying with different lineups in the early going.

When a transcendent player like Flynn leaves a program like San Diego State, it is a hard thing to overcome, especially as a transfer from another university. Everything in that one season went through him. You can’t fault Dutcher for going that route, but also, it leaves you with a pretty big void going into the next year.

You have to give Randy Bennett a ton of credit. He’s had players like Jock Landale, Patty Mills, Matthew Dellavedova, and so many other quality players in Moraga, but the team never seems to miss a beat when an impact player leaves.

Saint Mary’s is the pick here, not just because of that, but because they are the better offensive team in a game that should be low scoring with a limited number of possessions.