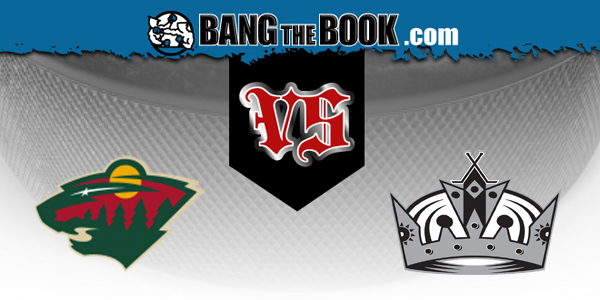 NHL Betting – Kings may have to answer Quick questions vs. Wild

During the pandemic, a lot of NHL teams have had to operate on the fly, so to speak. It has created some interesting scheduling situations, and some teams are a little behind in terms of catching up on the full slate of games.

The Los Angeles Kings, for example, have experienced a situation where they played back-to-back, and now had four days between games. The Minnesota Wild have played only eleven games thus far, and have not played a game since February 2.

These teams will lock horns at 10 05 p.m. Eastern time on Tuesday night at the Staples Center.

Remember that if you are a customer at BetAnySports, you can get reduced juice on this game, and after the first puck is dropped, you can continue to stay in the action with real-time wagering from Sports Betting Prime.

The Kings have not done especially well this season, with a record of 4 – 9, with three of those losses coming in extra time. Minnesota is 6 – 5. Neither of these squads is in playoff position in the West division. As you probably know, the NHL realigned itself to minimize some of the travel burden, with four teams from each of the four divisions advancing into the postseason.

Los Angeles has not been a sharp team coming out of the starting gate. In fact, they have given up 20 goals in the first period, while scoring only nine. And that is even after tallying three first period goals against San Jose in their last contest. This means, literally, that they have given up more than 1.5 goals per game in the first 20 minutes.

That is a tough thing to overcome. And although the Kings are not completely helpless offensively, with 3.08 goals-per-game, that often isn’t enough.

Let’s take a look at the NHL betting odds posted on this game, as they appear at BetAnySports:

Minnesota has gone through a rather harrowing experience when it comes to Covid-19 , as they have lost four defenseman to the protocols, with another one, team captain Jared Spurgeon, out with an upper-body injury. Ryan Suter is healthy, and playing, but he may have to work with some people who would not normally be in the regular lineup.

One of them is Matt Bartkowski, who shuffles a lot between Minnesota and Iowa of the American Hockey League. There are some others who, in effect, are vastly inexperienced, and that includes Calen Addison, who makes his NHL debut on Tuesday night. In other words, this is a thin crew on defense.

With the absences of Matt Roy and Sean Walker, Los Angeles is experiencing the same thing, albeit to a lesser degree. They have had to rely an awful lot on rookies on the back line.

That might make things a bit easier for Minnesota, which we believe in high danger scoring chances in their favor during full strength situations. And they’ll need that kind of boost, because we can pretty much forget about power play goals from the Wild. Unbelievably, they’ve converted only three of 42 chances, and the Kings have the ninth best penalty-killing unit in the NHL through their first 13 games.

The interesting angle here, aside from the first period trend for the Kings, is that there is something of a disparity in terms of the performance out of their two goaltenders. Jonathan Quick, who has been around thirteen seasons, is a two-time Stanley Cup winner and has also taken home the Conn Smythe Trophy. But he has underperformed in a big way, with a 4.05 goals-against average and .867 save percentage. Those kinds of numbers will hardly even keep him in the NHL. Meanwhile, Cal Petersen has come on pretty strong, ranking 4th in the league in Goals Saved Above aAverage.

At the moment, there is a question as to whether Quick is going to be traded. At least that is what is being bandied about in the media. Ron Hextall, the former Kings executive (and ex-NHL goaltender), who has just been named general manager of the Pittsburgh Penguins, is in need of a goalie, and is said to have interest. Those two could reunite, and Quick might benefit from the change in scenery. As far as our latest information, he will be starting between the pipes on Tuesday, and that definitely affects our handicapping decision, as all six games he has started in goal have gone OVER the total.

So we’re going to ride that one, and may consider that first period proposition, where the Wild are -125 favorites. But be careful, since Minnesota may get started a little slower than usual after the two-week layoff.

NHL hockey may be played on the ice, but BetAnySports will give you a warm welcome with reduced juice, which always gives you a better deal on the odds….. And you can keep up with all the fast paced action with real-time wagers from Sports Betting Prime….. Get your account opened by using a debit card, credit card, person-to-person transfer or the virtual currency of Bitcoin, which is fast and easy with their automated system, and never incurs a transaction fee!