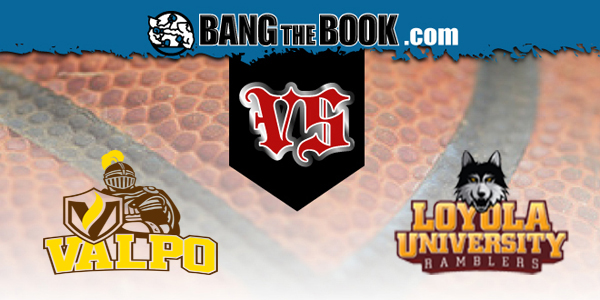 The gambling gods looked favorably upon us on Tuesday with an easy winner out of Bowling Green to ease the pain of Monday’s brutal ETSU loss. We’ll look to get on the plus side for this week on Wednesday after a good 5-2 week last week. Two weeks ago, we had a rough one, but that was on the heels of a 6-1. All in all, I hope you’ve enjoyed the write-ups and some of the recent successes.

On February 17, our travels take us to Chicago, where the Loyola Chicago Ramblers host the Valparaiso Crusaders. Loyola is favored by 20.5 at Bovada Sportsbook with a total of 127.5. We’ve got an 8 p.m. ET tip-off for this one and ESPN+ will have coverage.

Valpo won’t be the Crusaders for long, as the university’s administration polled students, alums, and others regarding the name and whether or not it should stick because of the violence associated with Crusaders. We’ll see what they’re going to be called, but they’ll be the Crusaders for now and a team on a crusade to knock off another legitimate opponent.

It was Valpo that dealt the Drake Bulldogs their first loss of the season back on February 7. Valparaiso lost the first game by just three points and then beat a shorthanded Drake bunch by 17 the next day. After an unsurprising letdown against a Bradley team that is far better than its record indicates, the Crusaders split the weekend set with Northern Iowa.

This is not a great Valpo team. These aren’t the Bryce Drew teams that we saw in the past. Matt Lottich has done an admirable job after a big talent exodus around the time that Drew left, but the Missouri Valley Conference is a tough place to be. Up until 2017, Valpo was in the much easier Horizon League. The loss of talent plus the conference change has made life tough for Valpo, but they’ve still been competitive.

This is a pretty bad offensive team. The Crusaders are 333rd in ORB% and 314th in 3P%. They take a three nearly 41% of the time, so their inability to make long jump shots has been a big hindrance. They have shot the three a little bit better in conference play at 32.1%, but that is still one of the worst marks in league play.

Valparaiso has done one thing well in conference action and that has been to take care of the basketball. Their 17.1% TO% is second in MVC action. Defensively, this is about a middle of the pack unit.

If you just look at this game statistically, you can see why Loyola Chicago is favored by 20.5 here. The Ramblers are a top-five defense per Bart Torvik in adjusted defensive efficiency. They are 22nd in eFG% defense. They do all the little things well. They force turnovers. They rebound well. They don’t foul. They play well on the perimeter and on the interior, despite a low Block%. They are 34th in NP%, which is Near Proximity Percentage per Haslametrics, a metric that represents how often teams get to the rim on the opposing defense. Loyola Chicago plays very good defense in that regard.

This is also a strong offensive team. The Ramblers are third in the nation in 2P% at 59.6%. They do take a lot of mid-range jumpers, with the fourth-highest MR% in the country, but they make a lot of those shots. Those are typically not good shots to take, but the Ramblers have made a lot of them, particularly in league play.

We can’t just go by the stats, though. There are a few factors in play here. The first is that Loyola Chicago just played two games against Drake. Going back to playing a vastly inferior team is tough in my estimation. The second is that Loyola Chicago plays at the 327th-ranked tempo in college basketball. Usually the home team and/or the better team dictates the pace of a game.

That means that Valpo will be playing at Loyola’s slowed-down pace. It is hard to get blown out in a game that could very well have 64 or 65 possessions. Valparaiso should be competent enough defensively to hang. Of course, that should have been the case in the first game, when Loyola Chicago won 75-39, but Valpo was 3-of-20 from three and a very young team was just overwhelmed.

GET A BIG BITCOIN BONUS WHEN YOU DEPOSIT AT BOVADA SPORTSBOOK