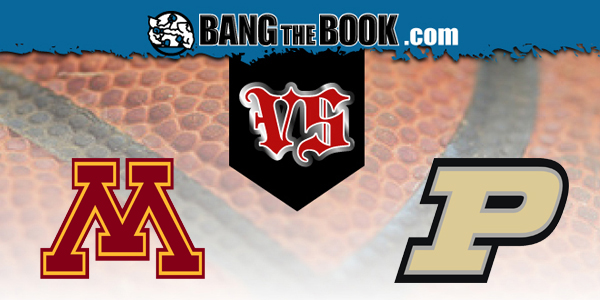 We’ve got a huge college hoops card for Saturday and this will be one of the busiest Saturdays of the year because there is no football this weekend. All eyes are on the Super Bowl, but those with an itchy trigger finger will be firing off college basketball bets this weekend while waiting on the biggest league in the United States to return on its biggest stage.

Bet wisely. Look for value. If you don’t like a popular public team and want to bet the other side, wait it out a little bit. Things like that should help your bottom line.

Hopefully we can help your bottom line a little bit with this spotlight preview for the game between Minnesota and Purdue. Sometimes you just have to look at a game featuring some big-name teams. This is one that fits the bill, as Purdue is -2.5 with an extra five cents of juice at -115 at Bookmaker with a total of 140.5.

Is it a coincidence or something else? The Minnesota Golden Gophers look capable of beating any team in the country at home. They are 11-1 in home games. They rank 34th in adjusted offensive efficiency and 45th in adjusted defensive efficiency when in the Twin Cities. In four games away from home, however, this Minnesota bunch is 0-4 with losses by 27, 12, 25, and 15.

This is about as big of a home/road dichotomy as you are going to find in college basketball this season. To be fair, Minnesota has played Illinois, Wisconsin, Michigan, and Iowa on the road. Those are all top-10 caliber teams. Those are four tough games to say the least and losing is understandable. Getting blown out, however, is a different story.

In those four road games, Minnesota is shooting 36.4% from two-point range and 25.6% from three-point range. They’ve still taken great care of the basketball, which has been a hallmark of this team all season long, but they haven’t made shots. Is this simply an outlier for an otherwise solid team? Is there something more to the road that just hasn’t sat well with this bunch?

Interestingly, the Golden Gophers were just 4-11 away from home last season in away or neutral settings. Their numbers weren’t nearly as bad as they’ve been thus far. Their two-point percentage was poor at 45.2%, but they shot okay from three at 33.2% and played well enough defensively to have been in a lot more of those games.

It is certainly quite a quandary and one to consider in any and all road games going forward.

Will Matt Painter’s bunch be able to take advantage of a Minnesota team that doesn’t seem to like hotel beds very much? This was a Purdue team on a mini heater with wins over Michigan State, Indiana, Penn State, and Ohio State before losing by 17 in Michigan’s last game before being forced to shut down despite no active COVID cases on the roster. Purdue hasn’t had the most impressive body of work for the season as a whole, but seemed to have found a nice groove.

Three of those four wins were on the road. The Michigan loss was at home, in a game where Purdue was 20-of-65 from the floor with .796 points per possession. It was the single worst offensive performance of the season for the Boilermakers. The most shocking thing about that game is that Purdue had 20 offensive rebounds and still only managed 53 points.

It seems like it was just one of those days. There aren’t a lot of things Purdue does really well. Their numbers do come against one of the best schedules in the country, as is the case for most Big Ten teams, so that just comes with the territory. One area of strength for Purdue is on the glass. They are a top-65 team in ORB% and sit just outside the top 40 in ORB% against. They are far superior in both areas to Minnesota.

There is another interesting little wrinkle to this game. Minnesota is 84th in 3P Rate at 41.2%, meaning that 41.2% of their overall field goal attempts are a three-pointer. They’ve shot 29.5% on those, which is 303rd in the nation. Purdue is one of the best, if you can call it that, teams at forcing the opposition to shoot threes. Opponents have shot a three 45.9% of the time against Purdue. Those shots have been made just 31.8% of the time.

Minnesota takes a lot of threes and doesn’t make them with any proficiency. Purdue stretches out the defense and forces opponents to take a lot of threes. Factor in the road woes for Minnesota, which could very well be mental at this point, and I have to take what looks like the obvious play and ride with Purdue -2.5.

The Boilermakers are the better rebounding team and should get some second-chance opportunities against a Minnesota squad that ranks 281st in ORB% against.