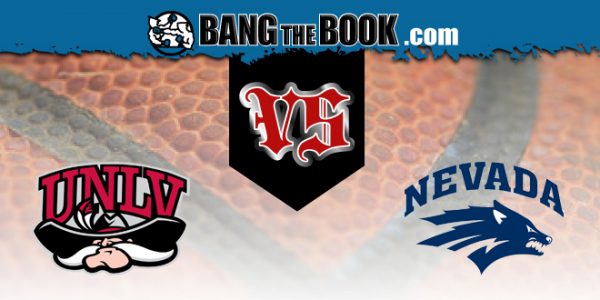 It’s been a good week here at BangTheBook on the spotlight college basketball games. It’s not a high-volume situation, but we’ve gotten five winners in six picks and hopefully can end on a high note for the week with this Sunday Funday selection.

Purdue looked dicey at halftime yesterday, but a huge final 20 saw the Boilermakers outscore Minnesota 51-27 to secure the bag and get a dub. Choices are a little limited today, as I always try to pick a late game with some lead time so that the preview can get as many eyes as possible.

That leaves us basically with Rutgers at Northwestern, Washington State at Washington, or UNLV at Nevada. With two interesting rivalry games on the docket, how about we go with the late one and the FS1 broadcast in Reno. Our friends at Bookmaker Sportsbook have Nevada -2 with a total on the game of 142.

These rivals will play again on Tuesday, so let’s see how the tone-setting game goes.

We talk all the time about using the box score from the first game to play something in the second game. That was the case for Utah State against UNLV last time out. The Runnin’ Rebels were 7-of-31 on two-point shots and 13-of-30 from three in the 59-56 win. It was an odd game to say the least. Well, Utah State won and covered the second game.

There aren’t a lot of standout performances for UNLV thus far. They had a month-long COVID pause that began in December and leaked over into January. In eight January games, the Rebels are 5-3, but two of the wins came against lower-division competition. They swept two from a very poor New Mexico team and had that aforementioned split with Utah State. A run of strong defensive performances came to an end with 1.18 points per possession allowed in the second Utah State game.

We’ll see if they can bounce back on that end of the floor here. This is a UNLV team that has been average across the board in a lot of ways. They take a ton of threes, firing away from deep 47.1% of the time. That is the 16th-highest rate in the nation. They’ve shot well on those, too, canning 35% of their triple tries. It’s been needed because UNLV gets to the line very little and doesn’t do much on the offensive glass.

In other words, there are a lot of empty trips when three-pointers aren’t falling. Fortunately for them, a lot have fallen, as they made 23-of-58 against Utah State and have made at least 10 treys in eight of 13 games. This is a small team from a height standpoint, so it makes sense that they would take a lot of threes. Cheikh Mbacke Diong is the only true big and the only guy that consistently finishes at the rim.

We preyed on Minnesota’s home/road dichotomy on Saturday night. Nevada seems to have an emerging one as well. Back-to-back losses in Laramie against the Wyoming Cowboys and a sweep at the hands of the San Diego State Aztecs have Nevada reeling away from Reno. The Wolf Pack are back at home now for four straight games, so they’ll have to figure some things out and get back in the win column.

This will only be the seventh game in Reno for Nevada, where they are off to a 4-2 start. The Wolf Pack are shooting 53.9% on two-point attempts at home, but have shot better from deep on the road. Small sample sizes are playing some tricks on us there, but it simply speaks to how inconsistent Steve Alford’s team has been this season.

To be fair, Nevada has a lot of new faces and young guys shouldering a big load. This is a transitional year for Alford’s team in his second season. The team’s top shot-takers are all transfers. There is Grant Sherfield from Wichita State, Desmond Cambridge Jr. from Brown, Warren Washington from Oregon State, and then a smattering of sophomores that played sporadically as freshmen with a much more experienced team last year.

This is one of the youngest teams in college basketball and it has shown with the inconsistent results and performances. Alford recruited very well at UCLA and New Mexico, but hasn’t really brought incoming freshmen to Reno in the first two years, so he had to go the transfer route. This is a team that gets fouled a lot and shoots free throws very well, but also commits a lot of fouls and has benefited from the opposition’s misfires at the stripe. It is a much taller team than UNLV, but a team still trying to find its way.

UNLV doesn’t get to the line a lot with a lot of jump shots from beyond the arc, so maybe that won’t impact Nevada as much as it has in past games. Nevada is concerning offensively because they rely too much on making mid-range jumpers. It’s not that they shoot a ton of them, it’s that their success rate on those shots is likely to regress a bit, as those just aren’t high-percentage opportunities.

Picking a side is tough here. UNLV only has three wins against D-I opponents and two were against a pathetic New Mexico team. Nevada has shown more of an ability to win over D-I competition, but I don’t like the profile for this team. I do like their height advantage a bit.

With no concrete play on the side, that brings us to the total. Nevada seems to be playing a bit quicker here of late. UNLV takes a ton of threes. Both teams foul quite a bit and I would expect UNLV to have trouble defending the interior with the size disadvantage, which often leads to whistles. UNLV will pretty much play at whatever tempo they are told to play at, so I think this one has a good shot at going over 142 with some fouling in play at the end of a close game and a heated rivalry.